Kareem Abdelmaqsoud: Eager to make an impact on the world

A pivotal moment for Kareem Abdelmaqsoud ’22 occurred during his first semester at the University of Rochester while he was taking a course in energy sustainability.

“This amazing student who was a senior came to class to tell us about a project he was working on and how he needed people to work with him,” says Abdelmaqsoud, a chemical engineering major.

The student was Muhammad Miqdad. And the project, called EZ Water, involved providing cheap, reliable drinking water to Pakistani villagers at their doorstep, leveraging a technology to filter, bottle, and distribute water under one roof.

Abdelmaqsoud joined the team, which won first place and $5,000 in the University’s  2019 Forbes Entrepreneurial Competition. The team donated the winnings so wells for drinking water could be installed in remote villages of Pakistan’s Thar desert.

Miqdad also introduced Abdelmaqsoud to the Grand Challenges Scholars Program, which in turn enabled Abdelmaqsoud to make two trips to London. One trip was with the EZ Team for a Global Grand Challenges Summit. During the other, Abdelmaqsoud participated in a summer research project at The Engineering and Design Institute (TEDI). He led a team that designed a user-friendly bracelet with GPS tracking that would make it safer for people with dementia to venture out into their communities.

“If it wasn’t for the Grand Challenges Scholar program, I wouldn’t have had that opportunity at TEDI,” Abdelmaqsoud says. “It has been a very influential experience for me. It made me appreciate how much of an impact I can have on the world.”

Abdelmaqsoud grew up in a small town in Egypt, working in a supermarket operated by his father and uncles. The high unemployment rate dictated that he set his sights high and become either an engineer or physician to get a good job. He focused on engineering and math. 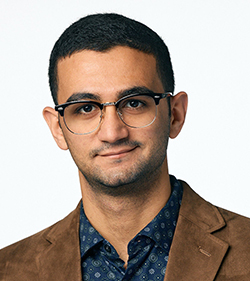 “Honestly, I didn’t really care about the job aspects as much as the opportunity to do science,” he says. “The more I heard at about scientific advances, the more I wanted to learn.”

Despite obstacles—lack of an adequate town library, no access to the internet or even a Y phone until high school—Abdelmaqsoud scored high enough on tests in middle school to leave home to attend a prestigious USAID STEM high school.

“It was very intensive,” Abdelmaqsoud says. He spent some sleepless nights the fall semester of his senior year: Taking ACT tests. Improving his English. Filling out forms just in time to apply for early decision at the University of Rochester. And all the while working hard to keep his grades up at the USAID school so he could reserve a spot in a top Egyptian college as a fall back.

“It was a difficult time. However, I had something inside me that told me I could get through it,” Abdelmaqsoud says.

The hard work paid off when he was accepted at Rochester. Abdelmaqsoud says he choose the University because of its welcoming attitude towards international students, and the financial aid it provided.

“It has worked out great,” he says.

Plenty of opportunities to explore at Rochester

Abdelmaqsoud has excelled at Rochester in part because he has taken full advantage of the opportunities at the University to sample a wide range of programs and activities. An important part of college life, he says, is “exploring”—learning as much from experiences that don’t suit you, as from the ones that do.

For example, he considered majors in biomedical and mechanical engineering, and tried courses in each, before settling on chemical engineering. “I like the interdisciplinary nature of it,” Abdelmaqsoud says. “I like my courses; I like my classmates, and I am doing really well.”

He received the department’s Donald F. Othmer Award for compiling the highest scholastic average during the first two years of study. He was also elected to Tau Beta Pi, the engineering honor society that recognizes students for their scholastic achievement and exemplary character. Abdelmaqsoud has served as the society’s business manager.

He especially enjoyed helping the Chem-E-Car team design, build, and test a miniature, chemical-powered car for competition during his first year. Alas, when the team arrived at a regional Chem-E-Car competition in Amherst, Mass., sponsored by the American Institute of Chemical Engineering, the car wouldn’t work. Abdelmaqsoud and his teammates worked until 3 a.m. in a hotel room to correct the problem. They arrived, tired but elated, in time to compete three hours later. “We ended up doing really well,” he says. “It was stressful, but I was really happy about it.”

Also during his first year, Abdelmaqsoud began knocking on doors of faculty members, seeking positions in research labs. He was successful, and quickly learned that “in experimental research you try a lot of things, and most of them fail,” he says. Often that happens because of the guesswork involved in deciding which chemicals might work best in an experiment. That sparked Abdelmaqsoud’s interest in using machine learning to try to predict ahead of time how different materials will behave, narrowing the field of candidates to those that have the highest probability of success.

He has been able to pursue that interest in the lab of Andrew White, associate professor of chemical engineering. Abdelmaqsoud has applied data mining machine learning methods to provide a visual presentation of a large Chembl (curated) dataset of organic molecules useful for medicinal chemistry. He is currently using kernel-meta learning, a subfield of machine learning, to model the QM9 dataset—considered the gold standard for machine learning predictions of various chemical properties.

Last year, Abdelmaqsoud took first place in a Computing, Simulation and Process Control poster session at the 2021 AIChE Annual Student Conference in Boston. The poster summarized his findings from a research experience for undergraduates (REU) program Abdelmaqsoud participated in at the University of Delaware. He used machine learning to search for catalysts for a process to convert the fructose from biomass, such food waste, into to biofuels and green chemicals.

Recently, Abdelmaqsoud started an internship with Santos AI, a California start-up company using machine learning for drug discovery. “I really like it,” he says. “It’s a research company, and it’s the kind of thing I would really like to do.”

Next step: A PhD

He is leaning toward eventually working in industry, rather than academia, in order to more quickly apply his research to real world problems, Abdelmaqsoud says. “I want to do research because I care about the impact it can have on society.”

He is eager to eventually return to Egypt and help address the problems there. However, initially, he will stay in the US, to continue expanding his knowledge, Abdelmaqsoud says.

“And then, when I have a specific project in mind, I will go back and apply it in Egypt.”