The Barbara J. Burger iZone at the University of Rochester is a creative problem-solving space designed to “empower students to explore and imagine ideas for social, cultural, community, and economic impact.” 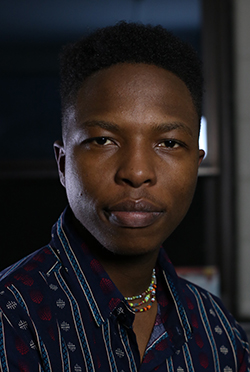 Claude Mulindi ’22 experienced how effective the iZone can be during his first semester at Rochester.

Mulindi pitched his plan to improve education access for hearing impaired children in Kenya. The panel included Julia Maddox, the director of iZone; Grant Dever, an iZone cofounder; and Jonathan Burdick, then dean of admissions.

“In this one room were all these people who have shaped my experience, in so many different ways,” Mulindi says.

The pitch went well. More importantly, Mulindi also met Muhammed Miqdad ’19, a chemical engineering major from Pakistan. Miqdad asked Mulindi if he would be interested in working with him for PakVitae, a water filtration company looking to expand into East Africa. Mulindi agreed.

“That single conversation was the first domino to fall in a whole series of events,” Mulindi says. He subsequently was part of Miqdad’s EZ Water team of fellow students who competed successfully in University entrepreneurial competitions. They also flew to London to pitch their project for using PakVitae’s new water filtration technology to provide cheap, reliable drinking water in remote villages in Pakistan.

Mulindi also learned about the University’s Grand Challenges Scholars program. GCS invites students to tailor their learning experiences around one of 12 grand challenges identified by the National Academy of Engineering (Mulindi chose Access to Clean Water), and then address challenge through competencies in research, entrepreneurship, interdisciplinary studies, global experience, and service.

“That gave me a framework for channeling the skills I was learning as an engineer to address problems in the world,” he says.

“So that was the start of it all,” Mulindi says. “That one pitch at the iZone.”

‘Rochester was the perfect institution for me’

Those who have worked with Mulindi describe him as inquisitive, hard-working, and down to earth--a person who is eager to learn, unfazed by challenges, and takes creative approaches to solving them.

Mulindi credits those attributes to his upbringing by his father, a high school biology teacher, and his mother, a teacher of English literature

“They put a strong emphasis on education ever since I was young,” Mulindi says. “There were always books around the house, and they always invested in my education.”

They also instilled in Mulindi a curiosity to “learn about how the world works,” and especially how other cultures view the world.

He attended kindergarten through high school at Brookhouse School in Nairobi. The private, international school emphasizes “a broad education combining extracurricular activities, academics and community service to ensure students will be well-equipped to be 21st century citizens,” Mulindi says.

One of his service projects at Brookhouse involved visiting Nepal for a month in 2016 to rebuild a primary school after a devastating earthquake. “That was a profound experience for me,” Mulindi says. “We didn’t just rebuild the school and leave. There was a large emphasis on getting the local population involved after we left and thinking about amenities and resources for the school and its students.

“It got me thinking in a broader sense about how I want to approach service, and the most dignified way to help people around me.”

Mulindi’s guidance counselor, whose son is a University of Rochester alumnus, encouraged him to consider enrolling at the upstate New York campus.

“I knew private US universities in the east had a reputation for being very welcoming of international students, and offering them generous support,” Mulindi says. “In addition to that, Rochester’s open curriculum appealed to me because I didn’t know exactly what I wanted to study. But I knew I would have the opportunity to explore different disciplines, and not be confined to just one. So, Rochester was the perfect institution for me.

“Now, going into my final semester, I can say 100 percent it’s been the most incredible experience. I wouldn’t trade it for anything.”

Even the best ideas need funding

A pivotal experience for Mulindi was the opportunity to conduct a study for PakVitae on the feasibility of distributing its hand-held water purification device in Kenya. With funding support from the University’s Greene Center for Career Education and Connections, Mulindi traveled to the East African nation to interview 100 families and small businesses on their water consumption patterns. He also interviewed directors of leading municipal water companies, and executives at the Kenya Bureau of Standards. He compiled his findings into a formal research document for PakVitae’s executives.

“That experience developed my networking skills, and my ability to conduct research,” Mulindi says.

His Rochester experience has included a wide range of other activities. For example, he has worked with the Career Management Center at the Simon Business School on various projects, including a digitization project to upgrade student records. He conducted research for IEEE’s Entrepreneurship Policy and Innovation Committee, identifying challenges faced by underrepresented technology entrepreneurs. And he studied abroad in the UK.

As a result of his experiences, Mulindi says, he realizes that even the best ideas to help developing countries do not get far without funding. “A lot of what I’ve done with EZ Water involved pitching and trying to receive funds,” he says. “Now I want to be the one on the other side of the desk, the person who is giving out the funds and helping small businesses in similar situations be able to raise capital.”

Ready to ‘hit the ground running’

This past summer, an internship as a global consumer banking summer analyst at Citi Bank, “pretty much solidified my interest in banking,” Mulindi says.

After he graduates, Mulindi will work as an internal audit analyst at Goldman Sachs, the American multinational investment bank and financial services company in New York City.

“I am quite excited,” Mulindi says. The audit position will give him a “bird’s eye view of the entire company.” He is hoping to eventually help the firm identify opportunities in clean energy investing as part of its ESG (environmental, social, and governance) strategy.

“Honestly, with a company like that, the possibilities are endless,” Mulindi says.

“I don’t know where I will be five years down the road, but for now I just want to learn as much as possible and hit the ground running.”

Just as he has done at the University of Rochester.