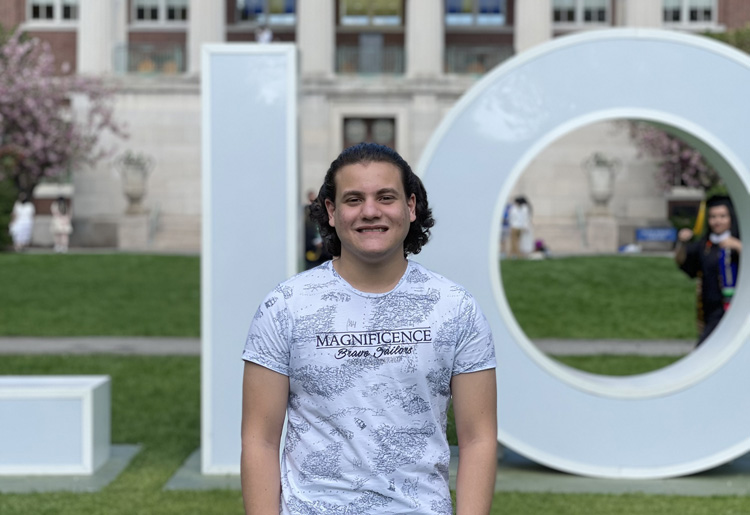 Hesham Elshafey ’25, an electrical and computer engineering major, was well acquainted with grand challenges even before arriving at the University of Rochester.

While growing up in Tanta, Egypt, Elshafey attended Gharbiya—one of 14 Egyptian STEM high schools.  The schools are unique in requiring students to work in teams to address the grand challenges that Egypt faces, through hands-on, project-based learning.

Elshafey and his classmates worked on creative solutions for a different challenge during each of five semesters. The challenges included providing essential services in overcrowded cities, recycling plastic, finding alternatives to mud-based building blocks to conserve farmland, and devising internet of things (IOT) devices to solve problems.

Elshafey, for example, devised an artificial intelligence (AI) detection system for tall buildings to tell residents which exits to use in the event of a fire and even alert firefighters to specific rooms where people might be trapped.

His favorite project, however, involved designing an ROV (remotely operated vehicle) programmed to dive into water at various depths to collect samples and place sensors capable of detecting contamination from microplastics.

“Building an ROV submarine is really, really exciting for me,” says Elshafey. “It requires a full system. It’s not like a robot on the ground. It needs to dive, which is a whole extra challenge, a whole extra physical perspective.”

At the University of Rochester, Elshafey is participating in a different Grand Challenges Scholar program. But it is providing him a framework of required competencies to further develop his robotics skills.

Elshafey is pursuing the challenge of “engineering tools for scientific discovery.” Robots, which roam the surface of Mars and the floors of our oceans, clearly fall within that category.

“It’s been great,” Elshafey says. A member of the Robotics Clubs, he is project manager for the club’s entry in the annual MATE ROV competition. The team is developing an ROV submarine that is “basically the same thing I was doing in high school, but at an advanced level,” Elshafey says. And it could very well end up being the centerpiece of his GCS experience.

An early fascination with robotics

In a family of physicians, Hesham is the first to aspire to be an engineer.

His fascination with robotics began in late elementary and early middle school. Elshafey participated in numerous competitions, and during high school won several awards, including a Yale Science and Engineering Most Outstanding Project Award for a minesweeper robot.

Elshafey credits his mother, a doctor who passed away seven years ago, with “being the first person who actually helped me recognize the difference between the silly things I was doing as a child, like breaking my toys, and helped me transfer that energy to something she thought would be exciting for me.

“She was the one who actually put me on a track to keep pursuing my interest in robotics by joining the STEM high school, then eventually coming to the University of Rochester to study electrical and computer engineering with a concentration in robotics.”

“These were all important building blocks.”

The University of Rochester was among 10 colleges Elshafey applied to. In his application essay he listed 25 reasons why Rochester appealed to him. They included the University’s generous financial aid for foreign students and welcoming attitude towards them, a strong program in electrical and computer engineering and robotics, an enticing mix of student clubs, plenty of opportunities to get hands-on research experiences, and the University’s relatively small size, increasing the opportunities for interactions with professors.

Now a sophomore, Elshafey has not wasted any time. During the second semester of his first year, he began working in the research group of Hui Wu, professor of electrical and engineering computer.

The project involved a a radar system that directs light beams at an object, then analyzes the time that elapses between reflection from the object and detection by sensors to generate 3D images. Elshafey concentrated on developing a thermoelectric system with a feedback loop—a PID (proportional–integral–derivative) controller)—to keep the system’s sensor chip at an optimal range of temperatures and also increase the speed of the process.

As a member of the Robotics Club, he is also participating in a NASA-supported Lunabotics competition that encourages university teams to create robots that could support space missions.

Still on his list: Applying for internships to get a better understanding of industry. Elshafey is also eager to start taking classes from Thomas Howard, the University’s robotics expert and professor of electrical and computer engineering—and perhaps eventually work in his lab.

Elshafey plans to remain at Rochester to complete a one-year master’s program in electrical and computer engineering with a concentration in robotics.  For now, he is leaning towards working in industry.

His long-term goal is to launch a start-up company that would solve individual user-defined problems—an idea he first explored in high school.

“You as a user tell me about a problem you have, perhaps a very personalized problem like packages being stolen from your porch. We will design a security system specifically for you, based on your own problem,” Elshafey says. “The solution could range from creating a simple circuit board to designing a whole system. You don’t really know until you meet the customer.

“I know that logistically it is extremely hard to do something like this,” he adds, “but I hope in the future as I’m getting experience in industry and in the market, I will have some better solutions to address these problems.”

Elshafey has a mindset well suited for solving problems. Getting at the root of “something that I don’t know” is highly motivating, he says.

“Maybe I just programmed something to act a certain way, but now it’s acting differently. I will be frustrated for like, two seconds, and then I will just sit back and try to figure out what is causing this behavior.

“If I understand why a problem happens, I can always fix it.”