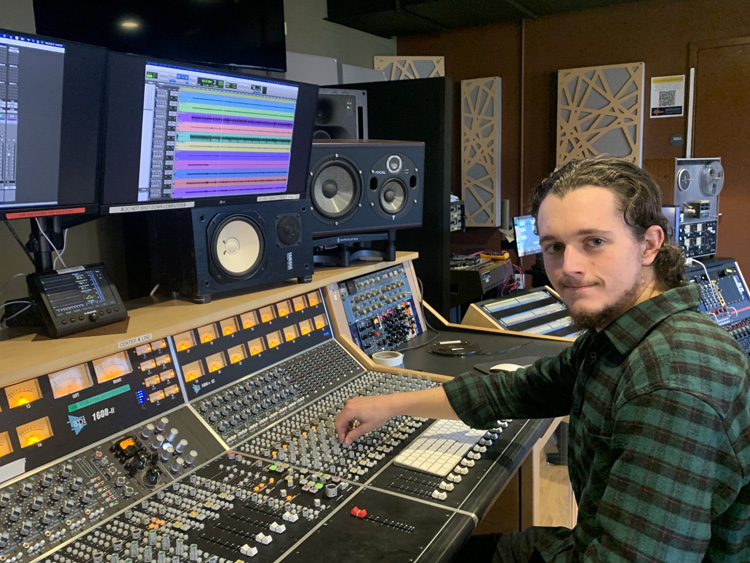 Max Morris '23 at the console in the state-of-the-art recording studio in Gavett Hall.

Rochester’s AME program, Blackbird internship prepare him to be an audio engineer

When the COVID pandemic forced the cancellation of in-person concerts, student music ensembles at the University of Rochester had to find novel ways—other than live performances—to reach their audiences. Individual video and audio soundtracks of each performer had to be pre-recorded, then stitched together into seamless, virtual presentations.

For Jameson “Max” Morris ’23, an audio and music engineering major, the opportunity to work on this technique with senior lecturer Stephen Roessner, a Grammy Award-winning audio engineer, was an invaluable learning experience.

“That really helped me, because audio engineering and music production is an area I’m really interested in pursuing,” Morris says.

This was one of many learning experiences he’s had at the University. Morris has also had numerous opportunities to record and/or mix tracks from live, in-person performances. An avid electric and bass guitarist, drummer, and cellist, Morris has been on the other side of the microphone, performing with the University’s rock repertory ensemble, chamber orchestra, and wind symphony. The University’s open curriculum enabled him to round out his passion for engineering and performing with minors in both music and philosophy.

“Coming here has really helped me a lot,” says Morris, who was recently selected as one of three recipients of the Wells Award, given to students in the Hajm School of Engineering and Applied Sciences who also excel in the humanities.

Morris, who is from Granby, CT., might have taken a different path if not for some important turning points in middle and high school.

Growing up, he enjoyed Legos and lacrosse. But his first experiences with music were less than satisfying. “I started on the flute in fourth grade, but I didn’t enjoy it,” Morris says. “I played clarinet for a bit and then dropped music altogether.”

However, a required music course in middle school introduced him to guitar. “I really enjoyed that, and took to it pretty easily,” Morris says. “From there I branched out to playing the drums. The bass guitar is similar to guitar, and so I picked that up along the way. And into college I started playing the drums a lot and then bass in the orchestra.”

Morris entered high school wanting to be a computer programmer, then decided he was more interested in electronics. He took several technology classes, including one “mostly just to fill some time,” he recalls. The teacher, also a guitar enthusiast, introduced him to the concept of audio engineering.

“Once I started looking at college, I knew I would much rather be doing that,” Morris says.

Most of the audio and music engineering programs he looked at offered BA degrees focused primarily on music production. Rochester stood out because it offered a BS degree, covering not only production, but recording and the science that underlies it.

“It seemed like a great fit,” Morris says. “I was accepted at all the schools I applied to, but it made the most sense to come here.” He was admitted as part of the GEAR program, which offers exceptional incoming students automatic admission to any of the Hajim School master's programs provided they stay in the school and have at least a 3.3 GPA in their senior year.

‘I am much more confident now’

One of his favorite projects at University was the opportunity to do his own recording, mixing and mastering of a live performance by the Rock Repertory Ensemble. “This involved managing the recording session, microphone use and placement, and the musicians,” Morris says. He recorded 30 separate tracks, with all instruments recorded at the same time, and vocals recorded either in an isolated room or separately after all other instruments were recorded.

Audio and music engineering students also have access to a recording studio in Rettner Hall. However, Morris prefers the state-of-the-art recording studio that opened in Gavett Hall in 2019.

“I love the studio in Gavett,” he says. “Most of the nicer equipment is there, which helps, but the space as a whole has a sound I love. There’s a lot of different things you can do with it.”

Morris also appreciates the opportunity to explore music more broadly through the music theory and history classes he has taken as part of his minor. He especially enjoyed a class that analyzed the major orchestral pieces that have defined different periods in music history, for example, the Also Sprach Zarathustra tone poem by Richard Strauss.

“That class was super helpful. I am much more confident now analyzing music performed on a large scale,” Morris says. “When you’re recording in a studio, obviously you need a lot of technical knowledge, but it also important to really know music, to be able to communicate with musicians from many genres.”

So, imagine Morris’s enjoyment interning there this summer. In between making the coffee, doing food runs, and other routine intern duties, he helped set up and take down the microphones for recording sessions. In between, he witnessed first-hand the career he envisions for himself.

“I could peer into what all these high-level engineers were doing on their sessions and how they approach everything,” Morris says. “It was really cool to be surrounded by people who are insanely talented.”

He was even allowed four hours of free access to Blackbird’s Studio D and the studio’s staggering array of microphones and musical instruments to make his own recording.  Morris and a fellow intern took full advantage of the opportunity, playing guitar and drums, and trying new recording techniques

The Blackbird experience cemented Morris’s desire to pursue a career in audio and music engineering—and helped him decide where he wants to do it.

After completing his audio and engineering major this year, he will stay at Rochester to complete a master’s degree in electrical engineering designed specifically for audio and music engineers.

“Previously I was looking at going to New York City (another major recording center), but the experience at Blackbird sold me on going to Nashville,” Morris says.

“Everyone down there is super friendly. It’s a high stress environment, but everyone is super chill, and very helpful,” he adds, “and I kind of fell in love with the city.”