Samantha Kapushy ’22 is on track to graduate from the University of Rochester in May with degrees in both chemical and mechanical engineering. 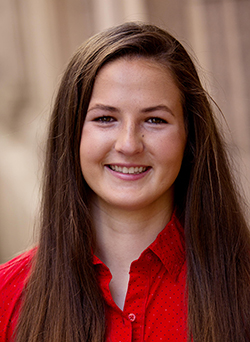 This is highly unusual. Getting just one engineering degree is demanding enough for most students. So, her decision to pursue two at the same time raised some eyebrows among her faculty and peers.

That didn’t deter Kapushy. Just look around you, she explains. Everything from cars, to rockets, to computers-- from everyday items to cutting-edge technologies—rely on both chemical and mechanical components.

“I want to be able to solve whatever problem is put in front of me. That, combined with applications in materials science, and the insurance that I would always have a well-paying job” were key motivations for pursuing dual degrees, Kapushy says.

Kapushy has also fulfilled the requirements to graduate as a Grand Challenges Scholar. To qualify, students must choose one of 14 “grand challenges” of the 21st century, identified by the National Academy of Engineering (Kapushy chose “providing energy from fusion”). Students then must demonstrate five key competencies: research, entrepreneurship, interdisciplinary studies, global experience, and service.

“It’s a really great capstone for your college experience, showing that you are a diverse learner, and able to have an impact with the activities that you do,” Kapushy says. “It demonstrates that I’ve been able to achieve what I wanted to. It is a nice way to be recognized for all the work I’ve done.”

An early interest in hands-on experiences

Kapushy was born and raised in Lancaster, PA. The rule set by her parents was: Do whatever you want, but you will go to college. Early on, her interest in engineering was piqued when her mother, a University of Rochester alumna, told her stories about an uncle who had distinguished himself in the field, “and told me how I was similar to him in a lot of ways,” Kapushy says.

She also enjoyed doing projects around the house with her father, including building a motorcycle. “I got used to doing hands-on work, and wanting to learn the science behind it,” she says. The program for gifted students that she participated in from elementary school through high school gave her further opportunities to pursue her interests in STEM.

During middle school, she already knew she wanted to pursue degrees in both chemical and mechanical engineering. In high school she took as many advanced placement courses as possible. She carefully designed a four-year schedule for each college she applied, figuring out which colleges would then allow her to achieve the dual degrees.

As it turned out, Rochester was “the only school within five hours of home that would let me do a dual degree in chemical and mechanical engineering and still graduate within four years,” Kapushy says.

Plenty of lab work and mentorship

She’s accomplished a lot in those four years.

Since her first year, for example, she’s worked with Hannah Hasson, a graduate student in the Extreme State Physics Lab of Pierre-Alexandre Gourdain, associate professor of physics. Kapushy did an independent study setting up an optical system for the lab’s pulse power laser machine. In November 2021, she gave a presentation at the annual meeting of the Applied Physics Society’s Division of Plasma Physics. She described applying a robust signal processing tool called Unscented Kalman Filter to plasma laser interferometry images.

She is also working with Danae Polsin, a senior scientist in the High Energy Density Lab at the University’s Laboratory for Laser Energetics. The project Kapushy is working on uses VISAR (velocity interferometry systems for any reflector) to analyze double shocked diamond samples. The goal is to further our understanding of the high-pressure, high-temperature diamond phase curve and the bc8 substance.

The lab experiences have been invaluable, Kapushy says.

“The research experience that you receive, especially working in a physics lab, is pretty intensive, involving a lot of high-level learning that isn’t covered in my coursework,” she says. “I had meetings with grad students, and upper-level readings. I read research papers, and random websites online, and python notebooks. It really helped me develop my ability to investigate on my own under a mentor’s guidance.

“The key for me is that it was a supportive environment,” Kapushy adds. “The grad students I worked with were great at helping me. They accepted that we were in the same boat together and took the attitude that we would learn together.”

Kapushy, in turn, has enjoyed opportunities to do her own mentoring. For example, she helped the Gourdain lab organize a summer program to encourage local high school students to pursue physics. As part of the event, she gave a presentation on the work she was doing with the lab.

During her junior year, while serving on the board of the AIChE (American Institute of Chemical Engineering) student chapter, she organized 10 virtual events for fellow students and assisted in the organization of other club events. They included topics like women in engineering, applying for internships and REUs, and taking advantage of the resources available at the University, especially the Greene Center for Career Education and Connections.

“I enjoy helping young students gain access to positive career development resources,” Kapushy says. “A lot of them don’t use the Greene Center as they should. We’re very lucky to have these truly phenomenal resources, so bringing it down to the club level and helping students understand how to tailor these programs to help themselves was very rewarding for me, and beneficial for the students.”

Kapushy already has a job lined up for after she graduates. She’ll start working with General Motors in Michigan as a global product development engineer in the company’s TRACK (Technical Rotation and Career Knowledge) program. She will choose four areas she’s interested in at the company, and rotate among them, spending six months in each. She hopes to pursue a master’s degree while working for General Motors with the support from their Salaried Tuition Assistance Program.

“I want my career to be focused on sustainability and other green initiatives,” Kapushy says. But she’s keeping her options open about how that career might unfold.

”I have considered getting an MBA and becoming an entrepreneur, or doing research at a national laboratory, which could require getting a PhD,” she says.