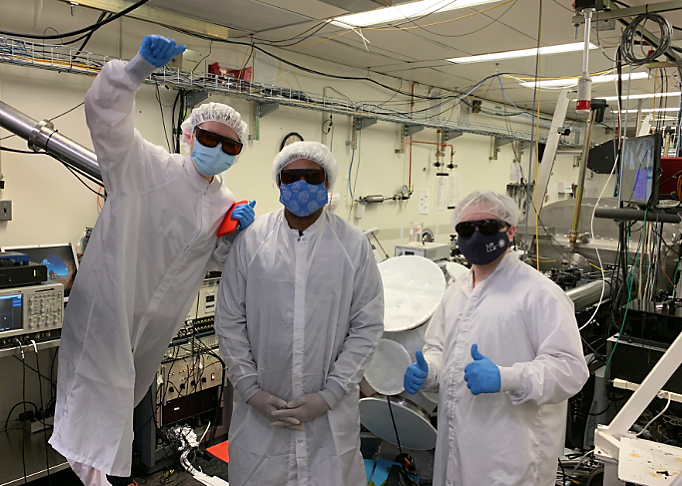 Left to right: Research associate Yiwen E and PhD student Kareem Garriga of Prof. Zhang’s Terahertz Research Group, and Gerrit Bruhaug, PhD student in the High Energy Density Physics Experiments group at the Laboratory for Laser Energetics, in the lab with the Multi-TerraWatt laser, one of two they will use to generate terahertz waves of record intensity.

Of all the electromagnetic frequencies, the terahertz (THz) band has long been considered the last gap, the final frontier for scientific exploration and discovery.

Research since the 1980s has demonstrated how terahertz waves can penetrate solid objects without damaging them. And, unlike X-rays, THz waves do not harm human tissue and DNA. These qualities offer tantalizing THz applications for everything from discovering bombs in suspicious packages to detecting tooth decay. But the generation and manipulation of intense THz waves is still evolving.

“The proposed ultra-intense THz source will open the doors for a large variety of linear and nonlinear light-matter interactions,” says principal investigator X. C. Zhang, M. Parker Givens Professor at the University’s Institute of Optics.  “It should lead to key developments that will enable new science and advance numerous THz wave sensing and spectroscopy technologies.”

The collaborative team is uniquely qualified for the project, which will build on progress made with a prior NSF grant and current Air Force Office of Scientific Research (AFOSR) grants. Zhang is an internationally recognized expert in terahertz, whose lab in 2017 demonstrated for the first time how to generate THz waves from liquid water. Zhang’s lab will continue working with Gerrit Bruhaug, a PhD student in the High Energy Density Physics Experiments Group, and other researchers at the University’s Laboratory for Laser Energetics (LLE), who collaborated on the prior grant.

LLE is the largest university-based Department of Energy research program in the nation and home to the OMEGA and OMEGA EP lasers, the most powerful laser systems found at any academic institution in the world.

Less powerful laser pulses have been aimed at various materials to generate terahertz radiation in research labs for several years. However, the more powerful and energetic lasers that will be used in this project present a unique set of challenges, says Yiwen E, a research associate in Zhang’s Terahertz Research Group.

For example, LLE employs a “single shot” setup. Laser shots are taken one at a time, meaning one chance to take measurements during an experiment. “It’s very different from what we are doing in our lab,” E says. “We use multi-pulses, that we can repeat many times, and we can scan at a lot of different points.”

Moreover, when a laser pulse of the intensity  planned in these experiments is fired at a target, both THz and X-ray radiation are generated simultaneously.

So, one of the top priorities of the project is to develop new kinds of terahertz detectors and spectrometers that are better suited for high intensity, single shot detection and are also capable of detecting the THz emissions separately from the X-rays, E says.

Another challenge is finding the right combination of factors—laser strength and duration, composition and geometry of the target—that will yield a strong, but tunable THz signal,” E says.

This is where Bruhaug plays an especially important role, E says. “Gerrit works with a lot of people at LLE—the technical groups, the laser groups—all of whom can discuss with him how to make this work,” she says. “Gerrit is very important, and we want to give him a lot of credit.” 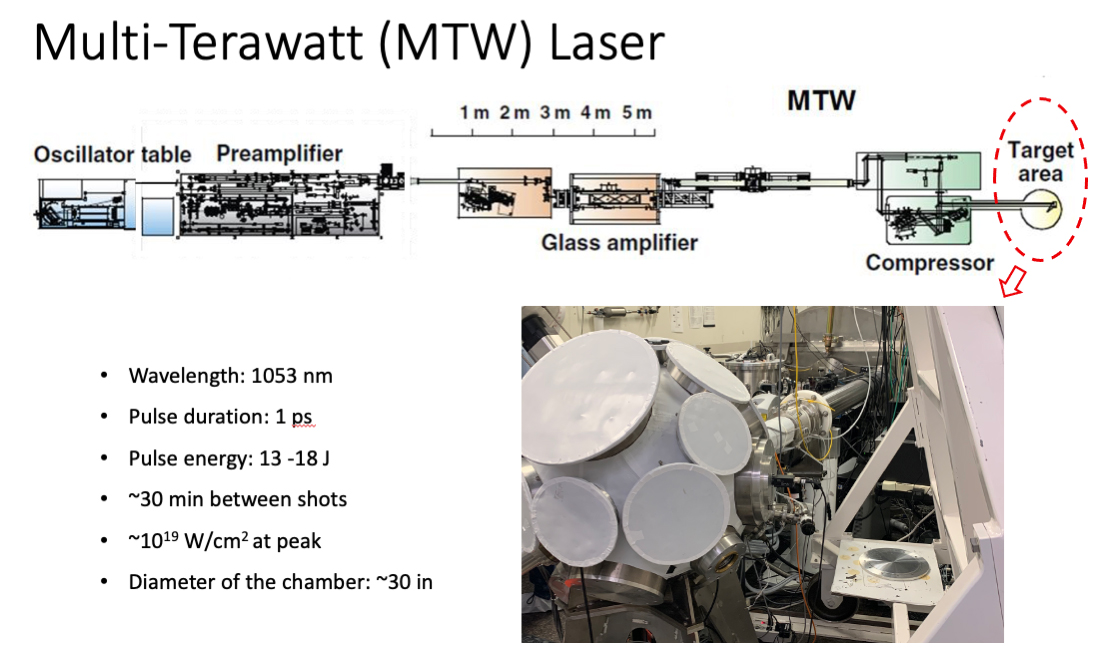 A closer look at one of the single shot setups the researchers will use at the Laboratory for Laser Energetics.