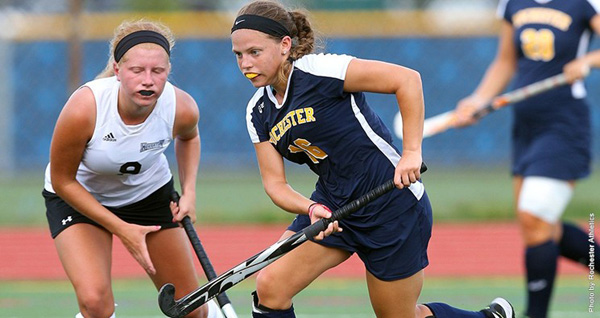 Oct. 8, 2014 – Michelle Relin, who has played field hockey since 7th grade, always dreamed of being a college athlete.

That dream has come true – and how. When she scored two goals and assisted on another during a recent game against St. Lawrence, she became UR’s all-time leading field hockey scorer. (Read more here.)

On the other hand, Relin didn’t know anything about optics when she arrived here as a freshmen, but she’s hoping to make a mark in that field as well.

“I took the Optics 101 class on a whim and fell in love,” relates Relin, a junior majoring in optical engineering. “I want to make an impact on the world, and I have full confidence that optics will get me there.”

That is quite an undertaking – juggling varsity sports with an engineering major, especially  given optics’ heavy emphasis on math and physics. “It's not a secret that optics is a challenging major- and I'm certainly not going to tell you otherwise,” Relin said. However, “after getting to know the faculty and the professors, I knew I chose the right major. It's a very impressive institution and one that I am extremely humbled to be a part of. Optics is fascinating and the more I learn about it the more I love it.”

Field hockey takes up 25 hours a week – sometimes more – during the season. “When we travel for away games, sometimes we could be gone for an entire weekend,” Relin adds. “But what makes this experience so rewarding, is being able to be a part of a renowned Institute while making an impact on the field hockey field. My coach, Wendy Andreatta, is amazing. I am able to juggle it all because of her. She has been nothing but a constant support system for me and I wouldn't be here without her.”

She also credits her academic advisor, Prof. Jim Zavislan, who has “been a mentor for me, more than he probably realizes.”

Relin was a mentor herself for visiting high school students this past summer when the Institute of Optics hosted its second Photon Camp; Dan Smith, the Institute’s undergraduate program manager, describes Michelle as a “great role model for young women.”

Relin says her biggest reward in playing UR field hockey is experiencing how a shared love and passion for the sport can bring 18 teammates together.

“We all come from different backgrounds,” Michelle says, “but every time we step onto the field we are one. And for me it’s both rewarding and an honor to be a part of something so moving.”