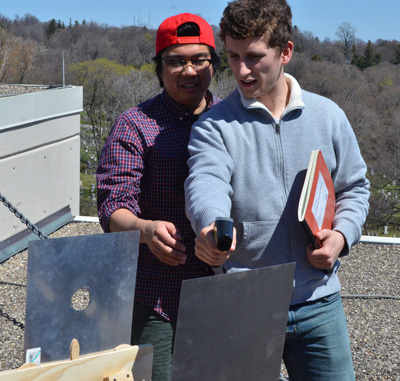 Sean Reid, at right, tests an infrared thermometer with Solar Concentrator
teammate Henry Pablo during a senior design project experiment on the
rooftop of Wilmot Building.

Most Hajim School students have their hands full working on one senior design project.

Sean Reid, an optical engineering major, is working on two --- and even considered three at one point.

“I started working with (Assistant Professor) Nick Vamivakas on a self balancing, one-legged robot, which would have been awesome and I would have loved to do it,” Reid said. “But I realized I wasn’t going to be able to spend as much time on it as I needed to.”

So he’s fully immersed instead working with other optical seniors on designing a pathogen detector that can fit in a shoebox. And, by dint of minoring in mechanical engineering, he’s also working with an interdisciplinary team of MechE and Optics students who are perfecting a solar concentrator that could be used to sterilize drinking water and as a solar oven. (Click here to read about other senior design project this year.)

“This semester has involved a lot of reflecting on who I am, where my career can go, and what I can do – what my limits are,” says Reid.

He’s also learning about the dynamics of working on a team – in this case with two teams involving a total of 10 other students – and how a team comes to consensus on the tradeoffs that have to occur to meet project specifications under the pressures of a deadline.

The goal of the pathogen detector is to use a technique known as Brewster Angle Straddle Interferometry to create an inexpensive, portable device that a farmer, for example, could carry into a field where there are diseased plants. The farmer would rub some of the diseased plant material on a slide, insert it in the device, which would use polarized light from an LED to determine if pathogens were present. The device would then provide a readout alerting the farmer whether his plants needed to be quarantined.

“We’ve really struggled trying to get it to a compact form,” Reid said. “There are a lot of tradeoffs involved. For example, a longer focal length lens would decrease distortion in the image, but a longer focal length lens means increasing the design size. We also had a collimating lens to make the image contrast better, but that also increased the size of the design. We ended up eliminating the collimating lens, just to shrink the design down, and fortunately, Gary (Ge) our software guru, wrote a tight algorithm to accommodate for low contrast and distortion.”

“Without a doubt,” Reid said, “the most valuable lesson I’ve learned throughout these senior design projects is how to work as a team, how to interface with two different disciplines and how to talk to people who likely will not agree with you 100 percent of the time, and how to compromise and make the best decision.”

And that, no doubt, will serve Reid well when he embarks on his engineering career after graduating in May. He’s weighing two job offers, one from an optics company in Manchester, N.H., and another from a company in Seattle.

In the meantime, he is also preparing to give a talk at Lawrence Livermore National Lab last this month on yet another project he’s been working on for the Laboratory for Laser Energetics.

Remarkably, he insists he’s still managing eight hours of sleep at night, “which is just about the borderline of what I need.” 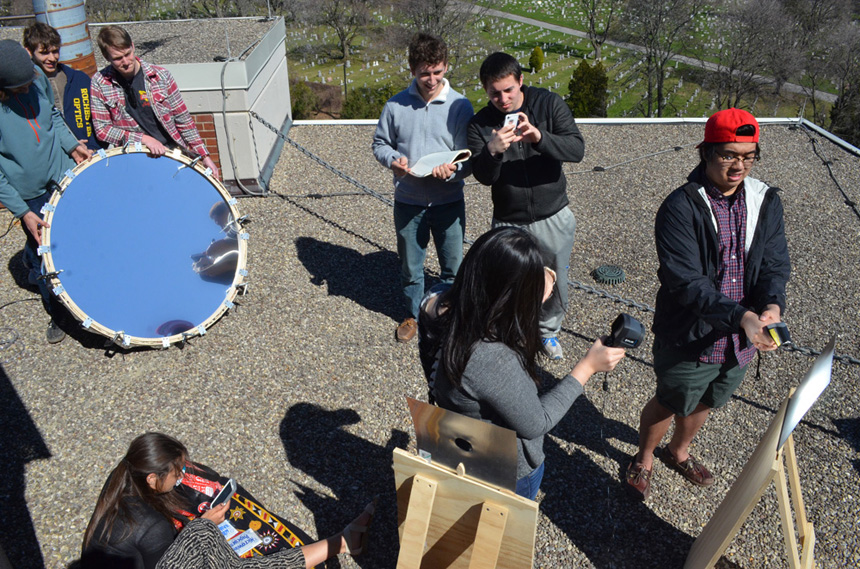 The Solar Concentrator project, which seeks to improve upon an initial design by Optics Prof. Wayne Knox, involves both optical and mechanical engineering seniors. During the experiment above on the rooftop of Wilmot Building Jacob Blacksberg of MechE and Daniel Morgen and Michael Dupuis of Optics aim the concentrator, while Reid and Bryan Maas of Optics write down readings and observe. Henry Pablo of MechE aims an infrared thermometer and Fifi Song of Optics aims a thermal camera to document how quickly the concentrator heats its target. Michal Adar of MechE, seated, times the observations.