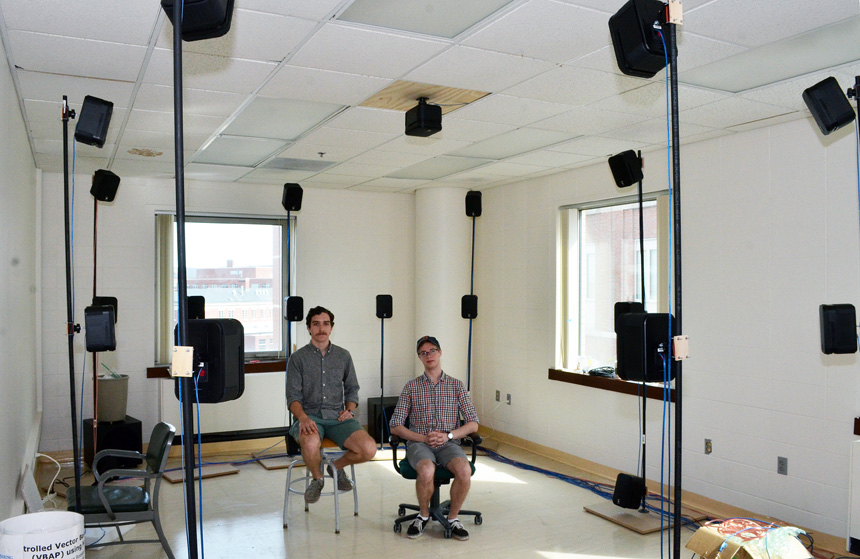 Frank White and Matthew Dylewsky in the "surround sound" studio they're creating for use by future students in the audio and music engineering program. (Photo by Bob Marcotte/University of Rochester)

A design project that will endure

Imagine immersing listeners in sounds that you’ve splashed all around a room  — much as an artist might splash paint on a canvas.

Future students in audio and music engineering — offered by the Department of Electrical and Computer Engineering — will be able to do that, thanks to the capstone project of seniors Tim Dick, Matt Dylewsky, and Frank White.

With financial backing from the department, they’ve strategically placed 29 speakers on stands all along the walls of a room in the Computer Studies Building, creating a cutting-edge “surround sound” studio.

The software program they’re using is MAX MSP, advertised as the “ultimate sonic toolkit.” It enables one set of speakers, for example, to project the sound of a truck roaring by on your left, while another projects the conversation of pedestrians on your right.

Vector based amplitude panning allows each speaker to be sequenced and weighted for maximum effect, so that sounds come at you from set directions one moment, then literally swirl around the room the next.

“We wanted to make a high-density surround sound environment that students majoring in audio and music engineering could use to mix their own projects in current surround-sound formats,” White says. “But we wanted it to also be extensible to formats that don’t currently exist, and also to some interesting sound field recording techniques.” 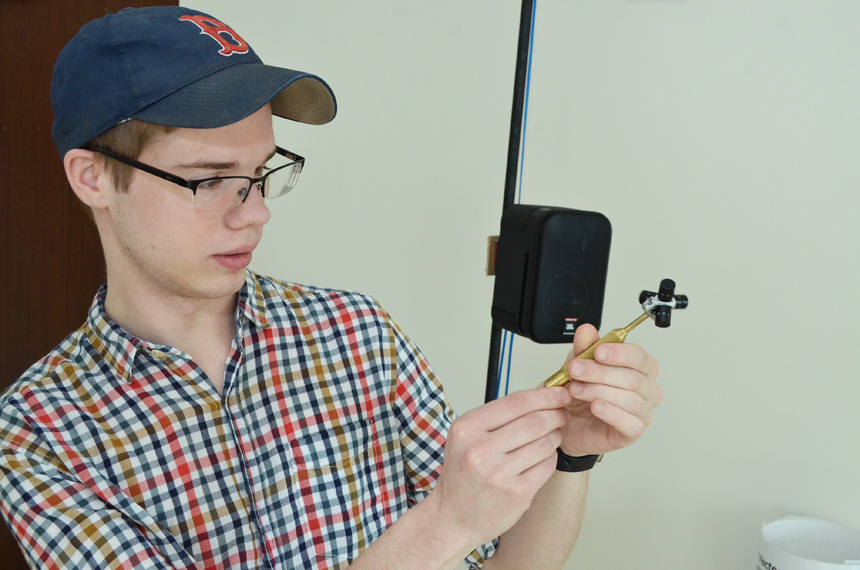 Dylewsky with an ambisonic microphone.

For example, Dylewsky holds up a department-owned ambisonic microphone, showing how the four sound-gathering capsules are angled orthogonally away from each other to gather sounds of equal quality from multiple directions.

The team recently used the microphone to record a performance of the University of Rochester Brass Choir in Strong Auditorium. Director Bill Tiberio positioned the musicians all around the edges of the stage and even in the balconies so they surrounded the audience.

When White plays the recording, the sound of brass instruments fills the room from all directions, like a warm sonic blanket.

The studio will be an important instructional resource for the department’s popular audio and music engineering major. The program prepares students for a range of careers in sound engineering – for example, creating music for video games or immersive sound effects for virtual reality.

White says the team would also like to get some “crosstalk” going with Eastman School faculty and students about the studio’s potential use for music composition, using a joy-stick based compositional tool.

“Imagine going into the room with the music you’ve created, and having a joy stick to pan the sound around the room, and be able to hear exactly where it’s going based on what you’re doing with the joystick,” White says.

The idea for the project originated with department chair Mark Bocko, who originally envisioned a “geodesic dome”-like array that would ensure each speaker was perfectly equidistant from a listener standing at the center. However, an array large enough accommodate larger groups of people would have taken too much space.

So part of the challenge for the team was to develop an alternate design that would come closest to matching a spherical array. They’ll continue to make refinements the rest of this semester, then put everything they’ve learned and done into a manual so future students can keep adding on.

Many senior design prototypes, once completed, are dispensed with, having fulfilled their purpose simply in the making. Not this one. “This crazy space we’ve built will exist somewhere in this building in perpetuity,” White says.