“I am thankful to God for this prestigious scholarship,” Beauclaire Mbanya ‘20 said when he was named a 2021 Rhodes Scholar—only the third in the University of Rochester’s history. “I’m very excited but humbled, as this is a major step in a long journey. I’m glad I am able to make my family and loved ones proud.” 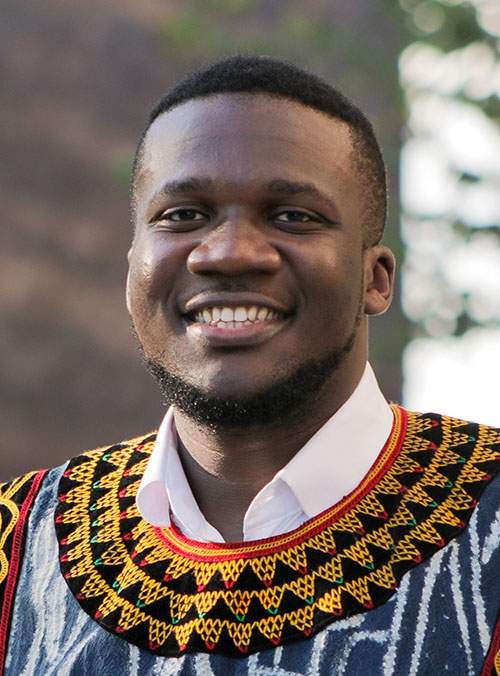 Those who have had an opportunity to work closely with Mbanya at the University know these words were not mere platitudes.

They reflect the deeply ingrained values and beliefs that Mbanya, a chemical engineering alumnus, learned while growing up in Cameroon. And they help to explain his remarkable record of scholarly achievements and cocurricular contributions—including a Davis Projects for Peace grant and a Schwarzman Scholarship--that caught the eye of the Rhodes Scholar committee.

Karen Berger, an associate professor of instruction in the Department of Earth and Environmental Sciences, speaks of Mbanya’s “deep empathy, and his commitment to improving himself and the world around him. He is not only outstanding in the classroom, he is also driven by a deep commitment to give of himself to causes that he cares about.”

Belinda Redden, director of fellowships in Arts, Sciences & Engineering, points to his “profound commitment to continuous challenge and self-improvement so that he can serve a purpose greater than himself,” and his “authenticity and humility; he is without pretense or affect and always expresses gratitude for whatever is done on his behalf.”

A place to ‘let my shine show’

Mbanya grew up in Douala, Cameroon’s economic capital and largest city. He credits his mother, a single mom, with helping him to “work out my moral and spiritual values.”

At an early age, Mbanya says, she taught him to “respect people, to love my neighbor as I love myself, and to always keep myself grounded, no matter how much I succeed. She always keeps challenging me and pushing me to not become complacent,” Mbanya says.

His mother also worked hard so he could have a solid academic foundation.

For example, Mbanya’s interest in science—particularly chemistry-- was sparked while doing experiments at Sacred Heart Mankon, the Catholic all-boys boarding school he attended in Bamenda. He also served as vice president of the student government there, completing the equivalent of middle and high school.

After graduating, Mbanya was accepted into the African Leadership Academy at Johannesburg, South Africa, which offers a two-year curriculum of African studies, writing and rhetoric, and entrepreneurial leadership to standout high school students from nearly 50 African nations.

ALA was a transformative experience for Mbanya in several ways. For example, he was aware of the disparities in access to electricity and basic services in his native Cameroon, which he attributed to the legacy of former French colonial policies.

However, he saw some of the same disparities in South Africa, “just on a different scale and different form,” he says. “That’s when I began asking, ‘how can all African developing countries begin addressing their problems of energy access, infrastructure, and development, using their own technical skills and workforce?’”

He was named a student leader by Teach for All for a project he founded while at ALA, called Cameroon Youth Reform Initiative. The program is designed to develop the critical thinking skills of young Cameroonians.

At ALA, Mbanya realized that an engineering degree, not a science degree, would better serve him in helping to address problems of energy access and infrastructure.

Though the University of Rochester has traditionally been one of the largest recruiters of African Leadership Academy students, Mbanya initially decided to attend another US university to avoid the Rochester winters. Then, John Burdick, UR’s dean of admissions at the time, visited ALA and gave a talk.

“He spoke not just about the academics at Rochester, but about Rochester’s support for international students and the campus’s spirit of community. That was what I was really looking for, a place where I could easily adapt, and let my shine show.”

When he arrived at Rochester, “it was my first time being in classes where there were a lot more white people than I had seen before,” Mbanya says. “I was initially very conscious of that.”

True to the values he grew up with, Mbanya decided to “look beyond” the differences in race. “Because at the end of the day, it’s more about your values and abilities, and how you treat the person next to you—how you live as a community,” he says.

Mbanya discovered that other Black and African American students at the University represented a broad range of cultures that he was interested in learning more about. He joined the Pan-African a cappella group and served as two years as senator with the National Society of Black Engineers, taking leadership roles when possible to gain confidence.

His Davis Projects for Peace Grant allowed him to pursue a restorative justice education program he designed in Yaoundé, Cameroon, working with internally displaced women as well as imprisoned violent offenders.

And the chemical engineering major found multiple ways to expand his understanding of the challenges—and potential solutions—involved in improving energy access in developing countries.

For example, he worked on a Chem-E-Car project that created a miniature vehicle powered by a chemical energy source to enter in competition.

He spent a summer as a Xerox Research Scholar in the lab of Douglas Kelley, associate professor of mechanical engineering, investigating the influence of different electrolytes on the performance of a Lithium-Bismuth liquid metal battery. This kind of battery is key in addressing problems of energy storage in solar grids.

Mbanya also participated in the Merit360 program in Chester, United Kingdom, working with a diverse group in addressing United Nations goals of ensuring that everyone has access to affordable, reliable, and modern energy services by the year 2030.

From that program, Mbanya co-founded CareforSeven. The organization focused on training more than 200 underprivileged high school students from electricity-deprived areas in Nigeria on how to build solar devices. It also empowers students with entrepreneurial skills to monetize the chargers for their communities.

This helped him “develop a holistic understanding of the non-engineering factors that influence making solar energy accessible,” Mbanya says.

In 2020 he was the first Rochester student chosen to be a Schwarzman Scholar as an undergraduate. This enabled him to participate remotely in a program at Tsinghua University in China, learning about global energy policies as well as groundbreaking solar energy approaches being implemented in Asia.

All of these energy-related projects earned him recognition as an NAE Grand Challenges Scholar.

Part of a community

Mbanya says his years at Rochester helped him develop the passions and traits he hopes to use for global good.

“I learned to be resilient and always reminded myself that the challenges were designed for me to grow intellectually,” he says.

“I built relationships with mentors who became part of my support system and constantly challenged me to embody the Meliora value of ‘ever better.’ And I learned that it’s impossible to succeed without being part of a community.”

Mbanya will travel to Oxford in October to begin his two-year, all-expenses paid pursuit of his graduate studies as a Rhodes Scholar. In his first year, he will do a master’s degree in environmental change and management. He intends to engage in issues at the intersection of sustainable energy, technology, and policy development.

His ultimate career goal is to work as an energy consultant, advising government and private institutions in developing nations on how to leverage sustainable energy solutions that promote infrastructure and economic development.

There will be plenty of people rooting for Mbanya.

“He was someone who took full advantage of every opportunity,” says Wendi Heinzelman, dean of the Hajim School of Engineering & Applied Sciences at the University of Rochester.

“I cannot wait to see what the future holds for this very promising leader.”