Mark Buckley couldn’t be happier. The associate professor’s first impression of the Department of Biomedical Engineering as an unusually warm and supportive place for a young faculty member has been borne out.

The department’s outstanding faculty mentoring program in grantsmanship has helped Buckley support a robust research lab, which uses principles of mechanics to improve treatments for diseases and injuries affecting soft biological tissues. The lab’s current focus is on musculoskeletal and ocular tissues including cartilage, tendon, intervertebral disc, and cornea, and on diseases ranging from osteoarthritis to keratoconus.

The major grants Buckley has received as PI or co-PI from the National Institutes of Health, for example, and the University seed funds he has received for particularly high-risk, promising research, reflect the collaborations he has forged with colleagues across the University, including its renowned Medical Center just five minutes away.

He has co-authored publications on diverse topics ranging from three-dimensional tracking of swimming bacteria to the use of ultrasound elastography to quantify transverse compressive strain in the Achilles tendon.

He has become key leader in the department. He chairs the BME Graduate Committee, is a member of the BME Diversity and Inclusion Committee, is the faculty advisor for the student chapter of National Society of Black Engineers (NSBE), and he has been actively involved in the UR Upward Bound program for many years.

“Mark is an outstanding faculty member in BME,” says department chair Diane Dalecki, the Kevin J. Parker Distinguished Professor in Biomedical Engineering.  “He leads an internationally recognized research laboratory and is one of those rare faculty members whose work combines exquisite experimental techniques with complex computational modeling to not only ask fundamental questions in tissue biomechanics but translate his findings to clinical applications.

“His research attracts talented and creative students to his laboratory, and he is an outstanding mentor for post-doctoral, graduate, undergraduate, and high school trainees, including low-income, first-generation, and/or underrepresented minority students.

“In the classroom, Mark is a gifted teacher and has developed two cornerstone courses in our biomechanics track. His courses are always widely ascribed by enthusiastic students in BME and other engineering disciplines.”

Not the least of his contributions is the extent to which Buckley supports underrepresented minority students in his research lab.

He was the first faculty member to support a high school “STEMtern” through the University’s Kearns Center. The center strives to build a pipeline—from high school through graduate school—for minority students interested in pursuing academic careers in STEM.

For these and other efforts, Buckley was one of five inaugural recipients of a Kearns Center mentoring award recognizing “outstanding faculty members who excel at mentoring and teaching low-income, first-generation, and/or underrepresented minority students who participate in Kearns programs.” Buckley and Ibrahima Bah, a former student in his lab, have also worked extensively with a local organization, Refugees Helping Refugees, as mentors to Western New York refugee students interested in STEM careers.

Part of the motivation for Buckley’s efforts is his biracial background. His biological father is black; his biological mother is white. He has never met them, but in recent years has begun a slow process of reaching out and has recently connected with several relatives through DNA testing services.

“I’m very light skinned, so most people I meet don’t realize I am biracial. As a result, I don’t think I have encountered the same barriers as my underrepresented colleagues,” Buckley says. Nonetheless “my upbringing has taught me to really value diversity. So that's something that I have always wanted to expand in STEM fields. I think it leads to better science. It leads to more dynamic conversations when you involve individuals coming from different backgrounds.”

Buckley, who grew up near Washington, D.C., said a “great series of science teachers” at Sidwell Friends High School helped spark his initial interest in science. Physics teachers George Lang and David Mog, in particular, “really made the subject material exciting,” Buckley says. And that sparked Buckley’s interest in majoring in physics at Haverford College, where he found another excellent mentor in Professor Jerry Gollub.

He pursued another passion at Haverford as well, studying Chinese history and language. “China was really fascinating to me when we read about different countries in grade school,” Buckley says. “Just think how much history there is in that country. A town in the US founded 200 years ago is considered incredibly old, but in China, that’s nothing.”

One of his goals was to study abroad in China, but a busy physics course load prevented that. This, in turn, set up fascinating detour on Buckley’s path to graduate school.

Instead of applying to graduate school, instead of even completing the difficult GRE physics subject exam then required for physics graduate programs, Buckley instead took a year off after graduating from Haverford to teach English at a Chinese high school. “It was a fantastic experience for me,” Buckley says. And one he has never regretted.

However, after a whole year of not even thinking about physics, Buckley was worried he would be unable to pass the physics GRE subject test. He spent another year working for the Radiation Epidemiology Branch at the National Institutes of Health. The group needed someone with a physics background to create a risk calculator to assess the risk of cancer caused by radiation exposures from the nuclear weapons tests during the 1960s. It bought him time to bone up for the GRE during his spare time—and was his first experience of applying physics to research that also involved medicine.

The possibility of merging physics with medical applications was further reinforced when Buckley enrolled as a PhD student in the lab of Itai Cohen, a professor of physics at Cornell University. “He was a new faculty member just starting his lab, reaching out to a lot of folks for collaborative opportunities, and because I was one of his first students, he had me work on several projects, kind of seeing what stuck,” Buckley says.

One of those projects was with Lawrence Bonassar, professor of biomedical and mechanical engineering. It turned out devices developed in the Cohen lab to study physical phenomena in colloidal suspensions showed promise in helping Bonassar’s lab understand how arthritis can create a “snowball effect” when it damages joint cartilage—eventually leading to bone grinding on bone and the need for a joint replacement.

And that is why Buckley, with three degrees in physics, would eventually up teaching in a department of biomedical engineering.

“I love the work we do in my lab,” Buckley says, “and I hope we’re going to make an impact. But that said, the most rewarding and important part of my job is mentoring.”

The chance that his lab is going to have a huge impact in health is “much lower than the chance someone we train in our lab—or someone they train—is going to go on and make a breakthrough,” Buckley says.

Hence his emphasis on providing his students with the tools they need to be successful “future leaders” in science, engineering, “or whatever else they go into.” His hope: that they can make the world a better place.

Buckley is hopeful that increasing numbers of minority students will eventually be among them. He is encouraged that “we are at point now” where academia and industry alike are putting new emphasis on increasing the numbers of Black, Hispanic, and other underrepresented minorities participating in STEM.

“It’s a trickly problem in a lot of ways,” Buckley says. “There are so many facets that need to be worked on simultaneously. We need to make sure that STEM is a welcoming place. One of the things that makes it less welcoming is the fact that there are fewer Black and Hispanic individuals currently in these fields. So, if you are a Black or Hispanic student, that’s something you’re not going to gravitate towards because the role models aren’t there yet.

“If we can concentrate on all phases of encouraging and supporting the many talented underrepresented students interested in STEM, starting with high school students and even earlier, I think we can make progress.”

His advice for minority students interested in STEM is that “STEM needs you! Don’t let anything get in the way of your success. View your talents, your experiences, and your perspective as strengths that will drive you to accomplish great things in your chosen field. Follow your passion.” 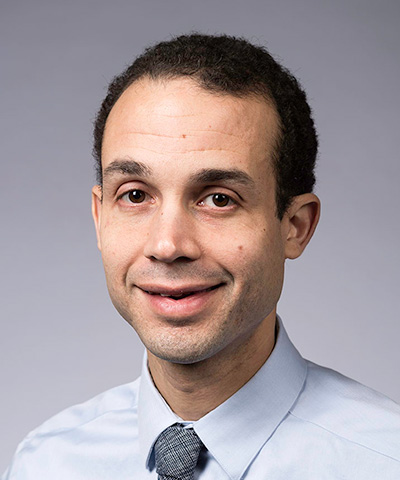