Charity Wallace ’09 has found her niche

Her ‘greatest joy’ is helping bring new therapies to market

Charity Wallace ’09 is working at the cutting edge of the pharmaceutical industry, testing mRNA-based therapeutic drugs and new vaccines for Moderna, the company that has immunized millions of people against COVID-19. 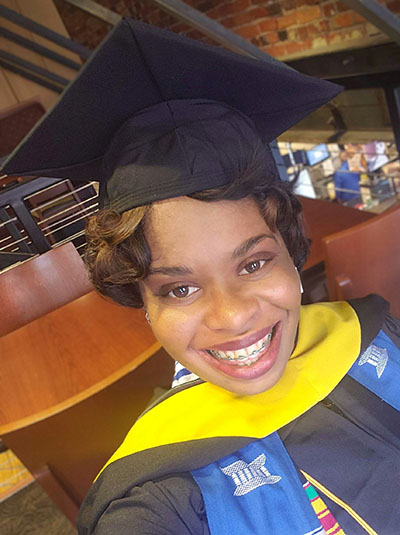 The path to her position as principal research associate at one of the world’s leading biotech companies has been anything but easy for the University of Rochester biomedical engineering alumna.

However, the “tough” four years she spent as a first-generation undergraduate at Rochester “toughened me up” for the journey, Wallace says.

“I learned that the level of success is not measured by failure, but how you are able to overcome those failures,” Wallace says. “The key is to keep trying, and to be able to advocate for yourself.

“The University of Rochester was very instrumental in helping me learn those lessons.”

Now Wallace is enthusiastically “paying those lessons forward” as a volunteer in the Real Reader program, mentoring and supporting young engineering undergraduates who, as Wallace herself experienced, often struggle to balance the demands of a rigorous engineering curriculum with a social life.

Wallace was born in the Hollywood-Ft. Lauderdale area and raised in Miami, Florida. She was one of eight children raised by parents who emigrated from Jamaica.

Her father, a construction superintendent and jack of all trades, and her mother, who worked in fashion retail, came from a rural area of Jamaica where there was limited access to the kind opportunities offered in this country.

“So, they really worked hard to ensure that my siblings and I stayed focused on doing well in sports and academia,” says Wallace. She participated in track and field from middle through high school. She was one of 50 seventh grade students from across Dade County who were selected to attend a summer magnet program on aerospace engineering, hosted by Florida International University.

The program, which lasted until her first year of high school, exposed her to advanced math and science courses. She participated in civil engineering projects, competing under the supervision of college student mentors, for example, to see who could build the strongest bridge using straw.

“That’s what really got me interested in the sciences,” Wallace says. Nikki Reaves, the coordinator of the program, was an important early mentor for her, Wallace adds, and major reason why she subsequently enrolled in the engineering magnet program that Reaves coordinated at Miami Coral Park Senior High School.

When Wallace began to plan for college, a cousin who graduated with a master’s degree from the Simon School of Business at the University of Rochester encouraged her to check out the school of engineering and applied sciences at the university’s River Campus.

Wallace applied, in part because after 18 years in Florida, she wanted to experience living somewhere with “real” autumns and, yes, even cold, snowy winters.

She knew she had made the right choice, Wallace says, when she participated in the University’s Early Connections Opportunity program for six weeks during the summer, just before starting classes full time. The program, offered through the Office of Minority Student Affairs, gives first generation, low-income and underrepresented minority students an opportunity to attend introductory classes and workshops and learn about campus support services—to help prepare them to navigate academic life.

“The level of camaraderie that I felt was amazing. I met people who were not only in engineering but different programs, people of all races and nationalities, and I really felt like I could really do well, just having that connectivity around me,” she says.

A mentor helps her through tough times

Nonetheless, her undergraduate experience “was really tough for me,” Wallace says. “I don't think in all honesty I put my best effort into the engineering course work.” Part of the problem was the extra freedom that came with being away from home and struggling to strike a balance between classes and social life, she says.

“The first year wasn’t so bad, but it got increasingly more difficult as I went along,” she says.

Her senior design project enabled Wallace and her teammates to work with memory shaped polymers in the lab of Mitchell Anthamatten, a professor and now chair of chemical engineering. This gave her valuable lab experience.

The team’s project involved developing a temperature-dependent shape-memory polymer for an artificial intervertebral disc, to treat patients with degenerative disc disease and lower back pain. Wallace and her teammates successfully pitched the concept in two University entrepreneurial contests, earning first place in the Forbes Competition for engineering students, and third place in the University-wide Mark Ain Business Model Competition, both occurring in 2009.

‘Twists and turns’ along her path

During the 12 years since graduating from Rochester, Wallace has attended three other universities, earning masters of science degrees in pharmaceutical sciences at the University of Maryland in 2014 and in biotechnology at Johns Hopkins University in 2019. She has worked at six companies, including Millipore-Sigma and AstraZeneca.

At times, she says, her career path felt haphazard, almost like it was unfolding by accident, beyond her control. Her master’s in pharmaceutical sciences, for example, was due to her failure to complete the PhD. portion of the program.

“At that point I was struggling to figure out what my next move would be,” she says. But she knew she wanted to remain a scientist. And her willingness to keep trying, to not give up on herself, paid off. She maintained a 4.0 GPA while earning the master’s at John Hopkins University.

“I’ve been able to find a path for my career that has become my biggest joy, working with pharmaceutical products, understanding the regulatory requirements and the analytical development needed to get these drugs approved by the FDA,” she says.

At Moderna, for example, she does characterization testing and method development for early Phase I and Phase II studies of the company’s expanding array of mRNA based products, helping to ensure that those products are safe and effective.

“I think that the biggest lesson for me has been that your path is not always a straight line,” Wallace says. “There are going to be twists and turns along the way.

“But I’ve learned to adapt to it, and I have really learned a lot about myself in the process.”

Her goal is to become a leader

Wallace now has a clear goal in mind: to not only continue to grow as a scientist, but to eventually become a leader, either as a principal scientist or director of an analytical development group. She wants to be one of the people who make decisions about products, and someone who can help give young people just beginning their careers “the tools they need to succeed.”

As a woman and person of color in a STEM field, she has experienced bias.

“The way I have dealt with it, honestly, has been to lead by example,” Wallace says. “I don’t think it’s good to argue with people or be unprofessional, I do the work and do it well.  That’s how I prove people wrong. And that’s how they start seeing me for my potential rather than what I look like as a woman and as a person of color.”

As a Real Reader, she tells engineering students to “be true to yourself. Know what you are worth and know what your capabilities are. And don’t let anyone tell you differently.”

She knows from her own experience that “engineering is not an easy degree and to do it in four years and still have that balance of school and social life—to just enjoy being a student—can be rough.”

So, she reminds students that, “It’s okay to fail. But it’s also important to understand how those failures occurred so that you can be better.”

Most importantly, Wallace encourages students to keep trying despite the inevitable failures they will experience.

“It’s when you don’t try that you truly fail.”