How do you make sense of the millions, even billions of data points that represent the interactions of neurons across the human brain? Or the interconnections of our country’s vast, network of power grids? Or the rates of COVID-19 infections and hospitalizations as they surge in some parts of the country, but not others?

These are the questions Associate Professor Gonzalo Mateos and his lab explore in the Department of Electrical and Computer Engineering at the Hajim School of Engineering and Applied Sciences.

Mateos’ research interests lie in the areas of statistical learning from Big Data, network science, decentralized optimization, and graph signal processing. Applications include a better understanding of the Internet, social networks, power grids, the human brain, and a more effective use of Big Data analytics.

For example, in 2016, Mateos received pilot funding from the University’s Goergen Institute for Data Science in collaboration with Alex Paciorkowski, assistant professor of neurology, to develop software to help predict which treatments are likely to have the best outcomes for epilepsy patients.

“I look at fundamental problems at the intersection of signal information processing and machine learning for networked systems,” Mateos says. “We are seeing this huge revolution in artificial intelligence, and data is becoming even more complex, unstructured and multi-modal. So, trying to crack problems in this domain is going to have a huge impact in decades to come in terms of bettering society, the economy, and the way we deliver health care.

“It touches upon everything.”

A family priority on education

Mateos was born in Montevideo, Uruguay’s principal city. His father, who graduated as an industrial engineer from Universidad de la Republica, Montevideo’s free public university, initially specialized in refrigeration systems. He then transitioned to being a manager for a major bus line. More recently he has returned to engineering, directing wind farm projects. Mateos’ mother, who studied psychology, stayed home to take care of Mateos and his younger brother and sister.

“My parents always inculcated in us that education is the first priority. So, with whatever money they had, they sent us to the best private schools,” Mateos says. “That was their investment in us.”

For example, Mateos spent six years of elementary school and the first three years of high school at a bilingual school that taught British values. That included taking English 4 to 5 hours a day starting at age 6. For the last three years of high school, he attended another private school with British values, studying math, physics, chemistry, and computer science in English speaking classes as part of the International Baccalaureate Diploma Programme. He especially enjoyed the chance to learn coding.

Mateos, like his father, enrolled at Universidad de la Republica. During an introduction to the engineering program, his faculty advisor explained how his discipline—electrical engineering—involved programming as well as math and engineering. “It seemed to me like a good tradeoff,” Mateos said. “And from that moment it became very clear that’s what I wanted to study.”

The path to Rochester

At the same time, one of his professors recruited him to work as systems engineer at Asea Brown Boveri (ABB) for three years, revamping systems in a couple of Uruguay’s large pulp and paper plants.

“That was an interesting exposure to real industrial work--hands on electrical engineering,” Mateos says. “Those were nice times.”

In 2006 he enrolled at the University of Minnesota, earning a master’s degree (2009) and PhD (2012), then serving as a research associate until 2014 in the lab of Professor Georgios B. Giannakis. His master’s degree focused primarily on wireless sensor networks. Then, as  Facebook and Twitter began their exponential growth, Giannakis suggested that Mateos focus his PhD on using signal information processing tools and machine learning to look at social network data.

“I thought it was really cool,” Mateos says. “You could get access to large amounts of interesting data. You could tangibly see that the world was becoming more globalized and recognize the importance of these really complex systems of large scale interactions.

“On the technical side, there were several fundamental open problems in extracting useful information from this high-dimensional, dependent, often highly corrupted data streams.”

During this period, Mateos also spent a year as a visiting researcher in the computer science department at Carnegie Mellon, working with a data mining group led by Christos Faloutsos to learn more about how to actually store and process large scale graph data.

By 2014 he was ready to apply for a faculty position. He received a lot of offers, but the one from the Department of Electrical and Computer Engineering at the Hajim School stood out.

‘I couldn't be happier’

Ironically, one of Rochester’s legendary blizzards almost upended his chances, postponing his interview. He was the last candidate to come to campus.

Nonetheless, Mateos got a warm reception. “I liked the people a lot. I had dinner with

Marvin Doyley (now department chair), and Zeljko Ignjatovic (associate professor). They were very friendly, and I was very comfortable.”

His seminar was well received. “There was a good connection with everyone,” Mateos says.

In addition, he liked the University of Rochester’s small size, strong programs, emphasis on excellence—and especially the top priority it placed on building a strong institute of data science. “I was sold on that and realized I could maybe help shape the institute’s direction,” Mateos says.

The department has fully supported him as he has grown his lab. He is especially pleased with the progress that the Goergen Institute for Data Science has made – under founder Henry Kautz, interim director Ehsan Hoque, and now permanent director Mujdat Cetin—in building strong programs and more recently bringing together researchers from across the University in working groups to establish areas of collaboration.

Mateos, recently appointed the Asaro Biggar Family Fellow in Data Science, leads one of those groups.

So he has not regretted coming here. “I couldn’t be happier,” Mateos says.

And the University is happy to have him.

“Gonzalo is an emerging leader in graph signal processing--a rapidly growing field where traditional signal processing techniques are generalized to irregular domains such as graphs.  This technique's appeal is that it can be applied to numerous applications, including transportation analysis, neuroscience, and social network analysis, to name a few," says Marvin Doyley, chair of the Department of Electrical and Computer Engineering.

Mudjat Cetin, director of the Goergen Institute for Data Science and a professor of electrical and computer engineering, adds: “I feel very fortunate to have Gonzalo as a colleague at the University of Rochester. As an institution, we should be very proud to have him among our faculty, as he is clearly one of the leading researchers in his area of expertise.”

And his course on random processes is “one of the favorites among data science master's students,” Cetin adds.

Grant support for Mateos' research has included a prestigious National Science Foundation (NSF) CAREER award of $407,000, received in 2018, to fund his efforts to learn underlying graph topology from the graph signals from distributed network processes.

That same year he received another NSF grant for a project aimed at modeling, identification, and controllability of distributed network processes.

Mateos is also considered a “rising star” in IEEE’s Signal Processing Society, Cetin says. “He has received a strikingly large number of major journal and conference best paper awards from the Society. There are very few researchers at his professional seniority in our domain who have a similar level of achievement.”

Mateos also gets high ratings from his students. “Perhaps one of the best professors you will ever come across. Focuses on learning and scoring a great grade (which you can easily manage if you follow instructions). Super easy-going and friendly, he welcomes (students) seeking help or discussing ideas beyond the classroom,” one student commented on Rate my Professor.

Mateos served as associate marshal in the 2018 University of Rochester Doctoral Commencement—an honor awarded to pre-tenure faculty members who have served admirably in teaching and mentoring graduate students.

Indeed, “our legacy as faculty is our students,” Mateos says.

A key moment for minorities in STEM

“I really hope that I can inspire my students to the extent possible,” Mateos says. “I learn a lot from them. And that’s another reason why I really like what I do. I hope that throughout my career I can keep learning from them, and being proud of their outstanding research, because our success (as faculty) ultimately hinges on their success.”

Mateos is acutely aware of the continuing underrepresentation of Hispanics, Blacks and other minorities in STEM fields in this country. He would like to see a greater diversity of faculty, staff and students at the Hajim School, and appreciates the increased focus on achieving that here, and across higher education and STEM fields in general.

That’s why he encourages Hispanic and other minority students interested in STEM to “not feel shy about following their passions”—especially now. “It can be hard at times if you come from an academically underprivileged background,” Mateos says. “But opportunities are opening up more and more for everybody in these fields.”

“The talent pool is there; we need to take advantage of it. And I am ready to recruit from it.” 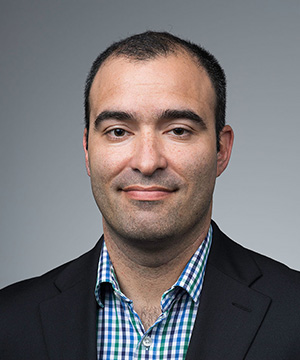