Rochester City School District in the mid 1970s and early ‘80s faced many of the same challenges with poverty and segregation as it does today. 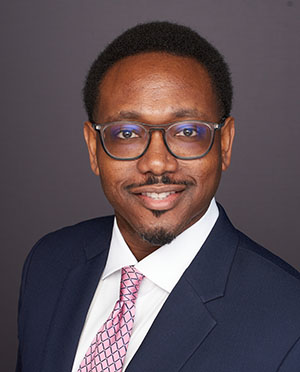 So much so, that Mario Simpson’s teacher, at a kindergarten on the city’s northeast side, suggested his mother place her son in the Urban-Suburban Interdistrict Transfer Program.

The voluntarily program, designed to reduce racial isolation in elementary and secondary schools in New York State, began in 1965 with the voluntary transfer of 25 minority students from the Rochester City School District to the West Irondequoit Central School District.

Simpson ’99, was accepted into the program and attended predominately white classrooms in the Penfield School District from 1st through 12th grade.

The University of Rochester electrical engineering alumnus still has decidedly mixed feelings about the experience.

“Probably the first time I realized I was different was in the third grade,” Simpson says. “I had an experience where a kid in my class expressed that I didn’t belong. I don't remember exactly what the student said, but it definitely made me realize, ‘hey I’m not like you because I don’t live out here and don’t look like you.’”

On the other hand, the program strongly positioned him to apply to universities. One of his high school counselors, in particular, encouraged him to take the SAT, guided him in applying for application fee waivers, and was “very supportive in encouraging me and making me feel that I could go on to college.”

Unfortunately, the A’s and B’s that Simpson earned at Penfield did not prepare him for the workload that awaited him at the University of Rochester where, for a combination of reasons, his path to a degree was a rocky one indeed.

The path to UR

Born in Columbus, Georgia, Simpson moved to Rochester at age 2. His mother was a City of Rochester employee, who then worked more than 20 years with the US Postal Service, eventually becoming a supervisor processing overnight mail. His father, a carpenter by trade, was skilled in drywall and painting, and was an all-around handyman.

Simpson was also “good with his hands,” he says, and by 7th grade began to enjoy math and science. In high school he also excelled in track and field.

However, by his junior and senior years of high school, Simpson was not sure he even wanted to go to college. But he felt pressured to do so—from multiple directions.

“No male in my family had ever gone to college,” he says, so there was pressure to become the first. The good grades he earned at Penfield High School fortified the expectations of family members – and the high school – that he should at least apply.

The University of Rochester was not even on his initial list. “I actually wanted to leave Rochester,” Simpson says.

However, the University sent him an application and waived the fee. It also came up with the best financial package, which was especially critical because his parents didn’t have a college savings plan for him, Simpson says. There was an additional incentive. His high school track coach, a UR graduate, connected Simpson with then UR coach Timothy Hale. Simpson wanted to continue track in college and the University had a solid coach and program.

Almost by default, then, Simpson ended up attending the University of Rochester.

Almost immediately he discovered that a lot of the incoming minority students already seemed well-acquainted with each other. They had taken advantage of a summer college preparatory program available to first generation and minority students through the HEOP program.

Simpson had seen the box on his application, which if checked, would have informed the University of his interest to participate, but he didn’t realize the purpose and benefit of the program. He wishes someone at the University would have seen that he was qualified for the college prep program and notified him. “That would have been very helpful,” he says.

Simpson chose electrical engineering as his major because of his interest in math and science —and because he worked on electrical devices in a high school shop class.

As a result of his math SAT score, for example, Simpson was placed on the path where calculus was taught over three semesters. This path didn’t leave much room for error. The math he was learning that semester was expected to be applied in the other engineering courses he was currently taking. He was also on the track team, which meant practicing every day and attending all-day track meets on the weekends. This took time away from studying. The workload was unlike anything he had handled before. As a result, he ended up on academic probation.

Due to these early struggles, his faculty advisor questioned his ability to handle electrical engineering, and by Simpson’s sophomore year, his advisor recommended that he find a different major altogether.

“As a young kid coming in, it really wasn’t what I needed to hear at that time, especially when I was already doubting myself,” Simpson says.

Simpson was determined to prove his advisor wrong, so sought other ways to get help.

Because he was on academic probation, he was required to check in with Lisa Norwood, the assistant dean of undergraduate studies in engineering.

“Lisa was great,” Simpson says. “I would ask her for help and advice even when I wasn’t mandated to see her.”

Norwood also suggested he seek assistance from the Office of Minority Affairs. There, Thomas Crews helped him by providing resources and tips for exam preparation and test taking.

Like for so many other students, each semester presented its challenges, but Simpson prevailed and got his BS in electrical engineering.

Can academia adapt to a changing world?

After graduating, Simpson was hired as a system engineer by Raytheon and worked with the company for 10 years, taking on increasingly challenging engineering experiences. He initially developed code for U.S Navy communications systems and eventually, as a lead systems engineer, he oversaw all technical aspects of an integrated data processing system, working on a venture with NASA.

He has continued working as a system engineer and IT program manager at various technology companies, while earning a MS degree in engineering management from The George Washington University, and an executive MBA from the University of Maryland’s Smith School of Business.

Throughout his career in the engineering and tech industry, Simpson says, it has become increasingly clear that, “what hiring managers are looking for are leadership qualities and problem-solving skills. The majority of companies are not looking for the deep technical skills taught to an engineering student at the University, for example. Unless you’re going into a specialized position. You’re going to learn a lot of what’s expected from you on the job. Technical skills are definitely important, but cultural fit and the ability to problem-solve are more important.”

It is a message that universities, including Rochester, need to address, he says.

“This is a debate you can have forever with academia, because technology in our world changes fast, but our curriculums don’t seem to change as fast,” Simpson says. “Are we really doing everything we can to prepare the next generation to have successful careers after graduation?”

A desire to promote change

A desire to give back and be a part of change at the University are reasons why Simpson is a member of the Hajim School Visiting Committee, whose members’ duties include providing feedback and advice on the school’s programs and initiatives. Simpson is also a member of the Department of Electrical and Computer Engineering Industrial Advisory Board.

One way he gives back is as a donor. However, he says, “I am very strategic as to where I give my money. It goes to the activities I participated in when I was on campus--to the track team specifically, and to the Hajim School. And last year, I was even more specific with my giving to the school, designating it for minority funding.”

Simpson hopes that other minority alumni are encouraged do the same.

“I still consider Rochester to be my home. The majority of my family still lives there. And I think the city and the University could do a lot more together,” he adds. “One of the things that troubles me is that we have this prestigious University sitting in our city. It’s one of the city’s largest employers, and yet the average Rochester School District student will not be able to attend the University because either they don’t have the grades to do so or because their parents can’t afford the tuition to send them. That really bothers me.”

“It’s good (the Hajim School) wants to highlight diversity and inclusion, especially after the year we’ve just had and the injustices we continue to see in our society against minorities,” Simpson adds, “but I would really like to have seen more progress in increased numbers of underrepresented minorities on campus in the 20 years since I left.”

Simpson was one of the first alumni to volunteer as a Real Reader mentor when the Hajim School inaugurated a 2-credit course, now mandatory, called Communicating Your Professional Identity. The goal is to hone the ability of the school’s graduates to prepare resumes, cover letters, LinkedIn profiles, and other materials essential to landing jobs.

His advice to the students:

“Even if you’re not yet qualified for an actual engineering internship position, working at an engineering company will help you learn from the people around you, so you can get an idea of how engineering is applied in the real world and see if this is something you want to do or not,” Simpson says.

“You want to learn that lesson with internships -- before you end up taking a fulltime job that you definitely do not like!”