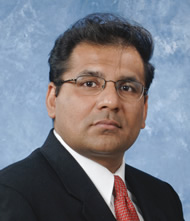 "Dr. Goyal’s pioneering research has had a profound impact on the field of high-temperature superconductivity, both in fundamental materials science and in the transition of scientific discoveries from the laboratory to the marketplace. His innovations have provided elegant solutions to achieving essentially single-crystal-like behavior in long lengths of superconducting material with techniques that are industrially scalable and cost-effective and to creating self-assembled, nanoscale defects within superconductors, which dramatically enhance their properties. A unique characteristic of his research is that he has worked at the intersection of science and technology. Many aspects of his work are very fundamental in nature, yet many are very applied. He is widely regarded as an international leader in the fields of high-temperature superconducting materials, texture development in materials, and electron backscatter diffraction." -- Oak Ridge National Laboratory

When Amit Goyal was elected a Fellow of the Materials Research Society in 2012, he was cited for his “seminal and sustained contributions to the field of small-scale mechanical behavior of materials” as well as professional leadership in materials science. The Department of Energy awarded him the E.O. Lawrence Award in 2011 in honor of his "pioneering research and transformative contributions to the field of applied high temperature superconductivity, including fundamental materials science advances and technical innovations enabling large-scale applications of these novel materials."

These are impressive accolades indeed!

Goyal is a corporate fellow and distinguished scientist at Oak Ridge National Laboratory, where he has conducted the ground-breaking research cited above since graduating from the University of Rochester with a Ph.D. in materials science and engineering in 1991. (He also earned a master's in mechanical and aerospace engineering from the University of Rochester in 1988.) He is also founder and president of TexMat LLC and TapeSolar Inc.

He has published more than 350 technical publications, including more than 30 invited book chapters and papers, and has co-edited 6 books. He has given more than 15 plenary talks and more than 150 invited presentations at national and international conferences. He has 70 issued patents, the most of any researcher at ORNL. A recent analysis of citations and papers published worldwide in the last decade in the field of high-temperature superconductivity, between 1999 and 2009, conducted by Thompson-Reuters’s Essential Science Indicators, ranks him as the most cited author worldwide.

He is a Battelle Distinguished Inventor and a fellow of eight professional societies: the American Association for Advancement of Science (AAAS), the Materials Research Society (MRS), the American Physical Society (APS), the World Innovation Foundation (WIF), the American Society of Metals (ASM), the Institute of Physics (IOP), the American Ceramic Society (ACERS), and the World Technology Network (WTN).