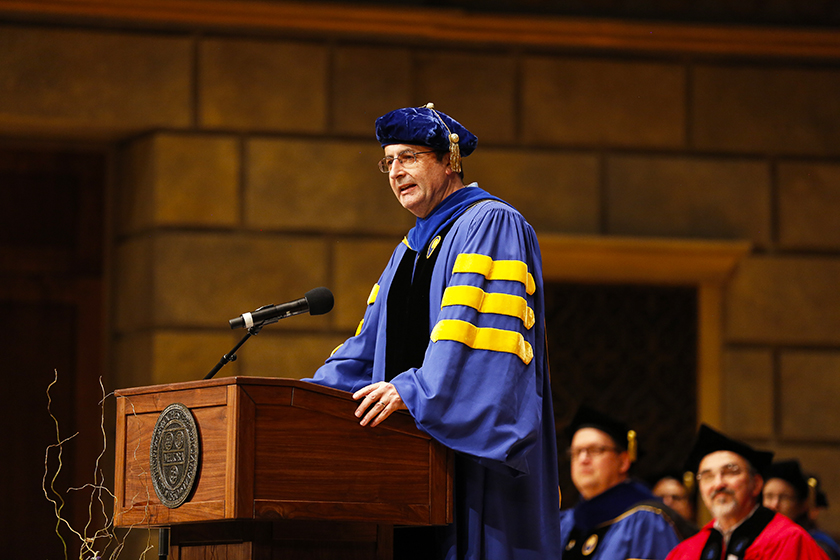 Computer science wasn’t even a department when Daniel Sabbah completed his undergraduate degrees in mathematics and physiological psychology at the University of Rochester in 1974.

And it was barely two years old when he came back for graduate school, specializing in artificial intelligence and computer vision. He completed his PhD in computer science in 1981.

“What we had not considered and were maybe a little naïve about in those early days was the potential impact we were going to have on society,” Sabbah told Hajim School graduating seniors at their diploma ceremony.

“Ethical application of software was never in the conversation.”

In the years since, digital search and social networking have had a “massive impact,” says Sabbah, the recipient of the 2019 Hajim School Distinguished Alumnus Award.

Massive interconnections and almost free communication and distribution of software will “redefine almost every industry and human interaction we know.”

On the plus side, “we bridge cultures and time in a way we never imagined,” he says. “But, as we have seen, there are down sides. Much like any advance, it is a double-edged sword.”

Sabbah, who retired as CTO and general manager of IBM Cloud and Next Gen Computing in 2015, is particularly well qualified to step back and take an enlightened look at “what we have wrought.”

For 41 years he rose through the ranks at IBM, starting as director of its software technology research division. He played a key role in pioneering IBM’s meshing of open source and commercial software through such programs as Apache and Eclipse.

Not by joining the alarmists who “seem to harken the doom of mankind from ‘intelligent’ machines,” he adds. But instead by trying to be “precise, concise, and constructive” in helping to shape a framework for “more critical thinking about technology and its side effects.

“We need innovation. We need you to innovate,” he told the graduating seniors. “But we need to thrive on constructive, positive innovation.”

Sabbah was selected as the recipient of the Distinguished Alumnus Award in recognition of his thoughtful and enthusiastic engagement with the University of Rochester for many years as a volunteer and philanthropic leader. He has exemplified his passion and pride in his alma mater through his membership on several advisory boards, including the Hajim School Dean’s Advisory Council, the AS&E National Council, and the University Innovation Advisory Council, to name a few.

“The University of Rochester was the core of my entire professional education, both graduate and undergraduate,” Sabbah says. “I was really lucky. It was intense, but, in the end, it made me unafraid to attack any and all aspects of my profession. Succeeding gave me the confidence and knowledge necessary to not be afraid to constantly innovate in a career focused on the evolution of my passion, which is software technology.”