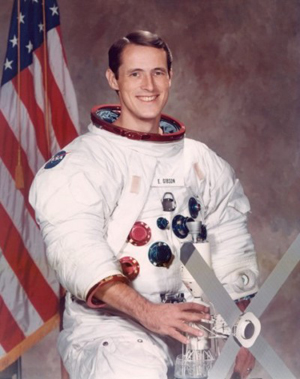 In 1973, Edward G. Gibson went where no other University of Rochester alumnus had ventured – into space – as science pilot for the final manned flight to the Skylab space station.

During what was then a record 84 days in space, Gibson and two other mission members conducted numerous experiments aboard Skylab. Gibson, for example, kept six camera telescopes trained on the sun, stars and comet Kohoutek, and spent a total of 15 hours 17 minutes outside the lab during three space walks. By the time the mission members returned to Earth, they had circled the globe 1,214 times, traveled 34.5 million miles and brought back 1,718 pounds of film, data and biomedical specimens for scientific study.

For these and other accomplishments, Gibson was inducted into the U.S. Astronaut Hall of Fame on October 4, 1997.

And, thanks to a nomination by Gibson, the University of Rochester in 2011 was selected as one of the Astronaut Scholarship Foundation's (ASF) educational partners, providing undergraduate students with the opportunity to be nominated for one of the 25 scholarships given by the foundation each year.

In his nomination letter, Gibson recalled his visit to Rochester as a high school senior and his interactions with the dean of admissions who "eyed my high school record (not stellar) ... then made the decision to give me a chance ... only a school with heart, as well as high standards would have enabled this..."

Gibson, who received an honorary doctorate of science from Rochester in 1974, says that his "academic growth really happened" at the University, where he "flourished because of the human approach of his professors."

A native of Buffalo, NY, Gibson was hospitalized three times as a boy with a potentially crippling case of osteomyelitis, a bone infection. "They were going to amputate my leg," Gibson told Paul Pinckney, a Rochester Democrat and Chronicle reporter in 1974. "But penicillin had just come out. They tried it and arrested the disease."

His long hospitalization set him back in elementary school, but athletics kept him "on the straight and narrow," Gibson said, and he graduated from the University of Rochester with a degree in mechanical engineering in 1959, earning such accolades as "gutsy, sound thinker, courageous, and adventuresome." He then earned a master’s in engineering (jet propulsion option) and then a doctorate in engineering, both from the California Institute Technology.

He served as senior research scientist with the Applied Research Laboratories at Philco Corp., doing research on lasers and the optical breakdown of gases. He also wrote a textbook in solar physics entitled The Quiet Sun.

In 1965 he was selected by NASA for its first group of scientist-astronauts. He served as a member of the astronaut support crew for the Apollo 12 lunar landing. He also participated in the design and testing of many elements of the Skylab space station.

During his mission aboard Skylab, Gibson was the crewman primarily responsible for the 338 hours of Apollo Telescope Mount operation, which made extensive observations of solar processes.

Gibson left NASA in 1974 to do research on Skylab solar physics data as a senior staff scientist with the Aerospace Corp. of Los Angeles. He then served for one year as a consultant to ERNO Raumfahrttechnik GmbH in West Germany, working on Spacelab design under sponsorship of a U.S. Senior Scientist Award from the Alexander von Humboldt Foundation. The module he worked on was later used on several Space Shuttle missions.

Gibson returned to NASA in 1977 as Chief of Scientist-Astronaut Candidates. He later was a principal with Booz, Allen and Hamilton, Inc.

In 1990 he began his own consulting firm, Gibson International Corp., specializing in program management, market development and space infrastructure design and operations.