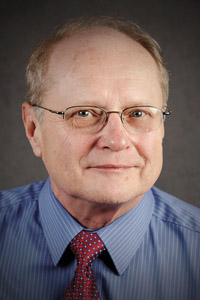 James Wyant has contributed significantly not only to the field of optics, but to two universities that pride themselves on optics research and education -- the University of Rochester, where he received his MS (1967) and PhD (1969) in optics, and the University of Arizona.

Wyant was the founding dean and continues as professor emeritus of the College of Optical Sciences at the University of Arizona, where he joined the faculty in 1974 and has advised nearly 60 graduate students.

He is co-editor or co-author of six books on optics, author of more than 300 professional publications, holds ten patents, and often lectures on interferometry, holography, and optical testing. He has helped launch and direct such ventures as WYKO Corporation and 4D Technology.

He has been president and an active member in both the Optical Society of America (OSA) and SPIE -- the International Society for Optical Engineering.

Wyant has received numerous awards, including the University of Arizona Tom Brown Excellence in Entrepreneurship Award and the Technology Innovation Award, the SPIE Gold Medal in 2003 and the OSA Joseph Fraunhofer Award. He received the Engineering Distinguished Alumnus Award from UR in 1994. He also was elected to the National Academy of Engineering,