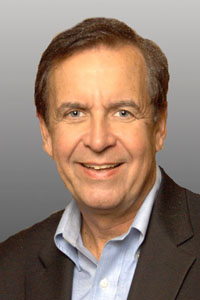 John Major is founder and president of the Technologies Solutions Group (MTSG), a strategic investment and consulting firm principally focused on the telecommunications industry and headquartered in Rancho Santa Fe, California. After launching MTSG in 2003, Major was CEO and director of Apacheta from 2004 to 2006, and was instrumental in establishing the company as a leading provider of wireless applications to improve workflow efficiency.

Major received his bachelor's degree in mechanical and aerospace engineering in 1967 from the University of Rochester, where he was a member of Beta Delta Gamma fraternity. He earned a master's degree in business administration with distinction from Northwestern University, a juris doctorate from Loyola University, a master's degree in mechanical engineering from the University of Illinois at Chicago, and was awarded an honorary doctoral degree from Westminster College in 1995. He was the recipient of the Meliora Citation for Career Achievement from Rochester in 2002, and holds ten United States patents.

Major's high-profile career in telecommunications included three years as chairman and chief executive officer of Novatel Wireless, where he led the company's successful initial public offering  in the fall of 2000. Prior to his post at Novatel, he was chief executive officer of Wireless Knowledge, a joint venture between Microsoft, Inc., and Qualcomm Inc.  Major had previously served as corporate executive vice president of Qualcomm and as president of its Wireless Infrastructure Division. From 1977 to 1997, Major held several executive leadership positions at Motorola, Inc., where as senior vice president and chief technology officer he directed a broad range of research and software development initiatives.

A key advisor to numerous corporate boards, Major is non-executive chairman and director of Broadcom Corp. He also serves on the boards of Lennox International Inc., Littelfuse Inc., and ORBCOMM. Major is chair of CommNexus, a telecom industry association, and emeritus member of the Board of Governors' Executive Committee for the Telecommunications Industry Association and of the Electronic Industries Association. He is director of the Rancho Santa Fe Foundation. He is Chairman of the La Jolla Institute for Allergy and Immunology.

Major and his wife, Susan, live in Rancho Santa Fe. He is the father of two grown children, John and Barbara.