This, despite the fact that her undergraduate experience as a first generation, underrepresented minority engineering student was nearly derailed by a combination of personal circumstances.  Nonetheless, the experience taught the relative newcomer from Jamaica resilience and problem-solving skills that have served her well, Allen says. 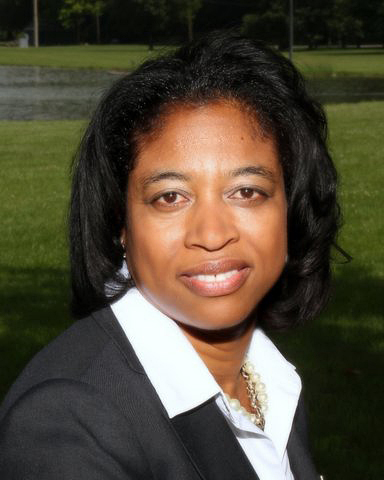 When she returned to the University for her executive MBA, Allen was married, more mature, and sure of herself. She easily acquired the knowledge and credentials she needed to take on important leadership roles at Xerox Corp.

Indeed, Allen remembers bursting into tears of gratitude when she attended the 2009 dedication of the George Eastman statue on Eastman Quad, honoring one of the University’s most important benefactors.

“I sat there, thinking ‘George had no idea how much this little girl from Malvern St. Elizabeth in Jamaica would benefit from this institution,” Allen recalls. “I sat there just sobbing and saying, ‘thank you George!’”

Ever since, Allen has been drawing on the lessons and blessings of her own life and paying them forward to help others. “Part of my modus operandi (MO) is, how do I give back to my community?” she says.

For example, Allen chairs the board of trustees of the Young Women’s College Prep (YWCP) Charter School of Rochester, which graduates 97 percent of the 7th through 12th grade City School District students it accepts.

“It brings me such joy to know the value that the school brings to young women from the city,” says Allen, who also serves is vice president of the foundation that supports the school. Many of the young women arrive at YWCP with reading and math levels well below state and national levels.

Allen especially enjoys mentoring undergraduates at the University’s Hajim School of Engineering and Applied Sciences as a Real Reader. Many of the first-year students she mentors express the same uncertainties she experienced as an undergraduate, Allen says.

“I see where the students are when we first start out, and I think, ‘That was me, many, many moons ago. I had no clue.”

From Jamaica to NYC

Part of the explanation for that involves a tale of growing up in two very different cultures. After her mother left for New York City, Allen was raised--from age 2 to 19--by her grandparents in Malvern, St. Elizabeth. The small village sits high in the Santa Cruz mountains of rural Jamaica.

Her grandmother, a homemaker, and her grandfather, a musician who also farmed to make ends meet, were not college graduates. But they provided a supportive environment for Allen to pursue her passion for learning.

She excelled in grade school, passing the Common Entrance Exam that Jamaican students take in sixth grade to determine their eligibility to attend a top high school. She attended the prestigious, all-girls Hampton School where she gravitated towards the sciences, especially physics, geography and chemistry. By the time she graduated, she had her eyes set on becoming a geomorphologist.

Then came the move to Brooklyn to join her mother and siblings. “Going to an all-girls high school in a small village did not prepare me for a New York City entry,” she says. “I certainly did not enjoy Brooklyn. I did not like how crowded it was. It was a huge culture shock.”

She dropped her plans to become a geomorphologist because it would have meant leaving Brooklyn to go away to college, just as she was getting to know her mother and siblings.

Instead, she enrolled at Nassau Community College, then transferred to New York City College of Technology to pursue a pharmacy degree. She made the dean’s list and was invited to interview with Eastman Kodak for a technician position in Rochester. She interviewed with Kodak, which owned Sterling Drugs at the time, and was hired. She hoped this would be a pathway for a career with Sterling.

So, what could possibly go wrong? Plenty.

Allen assumed that public transportation in Rochester would be as far-reaching as mass transit in New York City.

“In my limited understanding of how things worked in the US I thought that I could go to the University of Buffalo (for a pharmacy degree), while working full time at Kodak, and be a shoo-in at Sterling Drugs,” Allen recalls.

“I had a rude awakening when I got to Rochester—without a car, without a driver’s license,” she says. The local commuter bus lines served Rochester and the immediate suburbs but did not extend to Buffalo. So much for her plan to commute there to pursue a pharmacy degree!

But she still wanted to get a degree while continuing to work at Kodak.  She applied to the University of Rochester. “I was a great student at the time. It was the best college in the area, at least from the limited research that I did. So, I just applied, thinking why would they not want me? And when I got in, I was super excited.

“The journey though, was not what I expected or anticipated.”

Allen enrolled as a part-time student in chemical engineering, trying to complete her courses while still working full time at Kodak. She lived away from campus, so she had few opportunities to interact with other students. She underwent surgery for a tumor on her scalp during her first semester. Then, during her second semester Allen learned her mother had dementia. Her mother died before Allen graduated.

“So, my undergraduate experience was just filled with some tragedies that totally derailed my academic performance,” Allen says.

“When I look back on the experience, I think I just didn’t know a lot of things,” she adds. “It was a whole different culture. I was still new to the country. My mom had no college experience, so there was nobody in my family to advise me. And because I was part-time, I was not plugged into all the resources available to help students. I don’t even remember how I got through most of my classes.”

But she did—and she got her degree, despite a perfect storm of circumstances that might have caused any other student to drop out altogether.

“Such was my journey,” Allen says.

A trajectory to leadership roles

Her journey also included working a total of nearly 15 years with Kodak during the tumultuous years at the onset of its demise. Allen was a manufacturing operations supervisor, then a line leader responsible for implementing health and safety regulatory strategies for a new manufacturing plant.

She then started working with Xerox in 2006 as an operations manager at the company’s sprawling Webster campus. “I really wanted to boost my management acumen and leadership skills,” Allen says. So, the following year she returned to the University of Rochester to earn her MBA at the Simon School.

Immediately after that, Xerox selected her to participate in the ASCENT: Leading Multicultural Women to the Top program at Dartmouth’s Tuck School of Business.

“I was on a trajectory, considered a manager of high potential and being groomed for greatness somewhere,” Allen says. She subsequently served in a variety of leadership positions at Xerox, including consumables strategy manager, program manager for US Customer Business operations (including a call center in Manila), and, most recently, program manager defining plans to deliver competitive products to market.

Allen also became actively involved in the local chapter of the Black Women’s Leadership Council, one of the first employee resource groups pioneered by Xerox. The BWLC was established to “help Xerox to become a catalyst for black women’s issues, to be a bridge between management and employees, to help Xerox see us and afford us the opportunities. that we are so ready for, but not afforded,” Allen says.

She eventually became president of the organization, and still serves on its advisory board.

Allen is now embarking on the next stage of her journey. In August she will being working with L3Harris, the technology company, defense contractor and information technology services provider.

‘Take a look at my resume’

As a woman and as a person of color, Allen is doubly representative of groups traditionally underrepresented in STEM fields and in management positions. At times, especially when she was brought in as a change agent, Allen has experienced hostile backlash from other employees.

“It is hard sometimes to delineate if I am being treated that way because of my color, or because of my gender, my age, my position – or all of the above,” she says. But on at least two occasions there were clearly racial overtones to the backlash.

On one occasion while moving into a leadership position, she overheard a water cooler conversation suggesting she got the position because she was black. Allen confronted the gossipers directly. She pointed out the preponderance of black employees who weren’t in leadership positions—and invited the critics to “take a look at my resume.”

Another instance involved personal threats. Allen was advised by management to park close to her work building so she wouldn’t have to walk as far to reach her car on the nights she stayed late at the office. “I was told by security that they would ask the sheriff in my neighborhood to keep an eye on where I lived. I was cautious when I opened my mailbox, things of that sort. Some of the tales were anecdotal, but I remember one particular person who was shaking as he spoke to me, because he was so consumed with anger towards me.”

“It was just a very dark period.”

Fortunately, Allen says, her husband, her children, and a network of people she can trust in the community have supported her through the ups and downs. “And I have a really strong faith,” she adds. “All of those elements keep me whole, keep me sane, keep me humble, and keep me motivated.”

‘Just give it a try’

So when Allen mentors Hajim School engineering students as a Real Reader, she can draw on a wealth of experiences and lessons learned.

“I'm a big proponent of giving back when you have been so blessed with experiences that have benefited you. Why not share them with others who might not know, so that they too can continue to pay it forward,” she says.

What is her advice to other underrepresented minority students interested in pursuing a STEM degree?

“Give it a try,” Allen says. “You may not excel in every aspect of it, but you would be surprised how the rigor of it prepares you for life—the lessons learned, the discipline, the problem-solving skills.”

And don’t be intimidated by the fact everybody considers it a big deal to be an underrepresented minority student in STEM, she adds.

“It is a big deal, but you can do big things. You just have to try it. Nothing tried, nothing gained.”