This low-cost catalyst helps turn seawater into fuel at scale

For the first time, Rochester chemical engineers have demonstrated a ‘potassium-promoted’ catalyst’s potential for use on an industrial scale.

Now, the Navy’s quest to power its ships by converting seawater into fuel is nearer fruition. 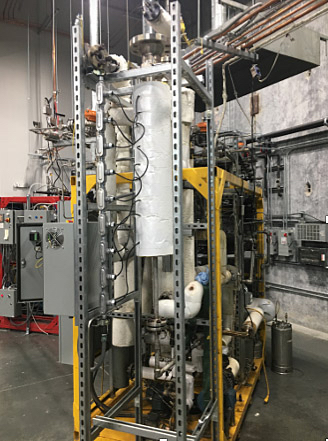 This reactor at OxEon Energy was used to validate the effectiveness of the potassium-promoted molybdenum carbide catalyst on an industrial scale. (OxEon Energy photo)

University of Rochester chemical engineers—in collaboration with researchers at the Naval Research Laboratory, the University of Pittsburgh, and OxEon Energy—have demonstrated that a potassium-promoted molybdenum carbide catalyst efficiently and reliably converts carbon dioxide to carbon monoxide, a critical step in turning seawater into fuel.

“This is the first demonstration that this type of molybdenum carbide catalyst can be used on an industrial scale,” says Marc Porosoff, assistant professor in the Department of Chemical Engineering at Rochester. In a paper in the journal Energy & Environmental Science, the researchers describe an exhaustive series of experiments they conducted at molecular, laboratory, and pilot scales to document the catalyst’s suitability for scale-up.

If navy ships could create their own fuel from the seawater they travel through, they could remain in continuous operation. Other than a few nuclear-powered aircraft carriers and submarines, most navy ships must periodically align themselves alongside tanker ships to replenish their fuel oil, which can be difficult in rough weather.

In 2014, a Naval Research Laboratory team led by Heather Willauer announced it had used a catalytic converter to extract carbon dioxide and hydrogen from seawater and then converted the gases into liquid hydrocarbons at a 92 percent efficiency rate.

Since then, the focus has been on increasing the efficiency of the process and scaling it up to produce fuel in sufficient quantities.

A key step in the seawater-to-fuel conversion process

The carbon dioxide extracted from seawater is extremely difficult to convert directly into liquid hydrocarbons with existing methods. So, it is necessary to first convert carbon dioxide into carbon monoxide via the reverse water-gas shift (RWGS) reaction. The carbon monoxide can then be converted into liquid hydrocarbons via Fischer-Tropsch synthesis. 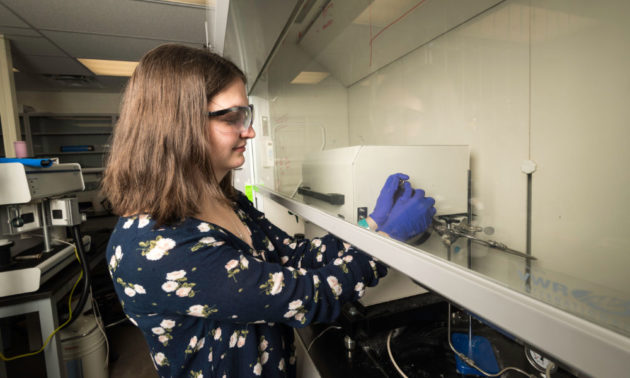 Madeline Vonglis ’20, who interned with the Porosoff research group last summer, conducted many of the laboratory-scale experiments to characterize the potassium-promoted molybdenum carbide catalyst, and is second author on the Energy & Environmental Science paper. She’ll begin her PhD in chemical engineering this fall at Pennsylvania State University. (University of Rochester photo / J. Adam Fenster)

Typically, catalysts for RWGS contain expensive precious metals and deactivate rapidly under reaction conditions. However, the potassium-modified molybdenum carbide catalyst is synthesized from low-cost components and did not show any signs of deactivation during continuous operation of the 10-day pilot-scale study. That’s why this demonstration of the molybdenum carbide catalyst is important.

Porosoff, who first began working on the project while serving as a postdoctoral research associate with Willauer’s team, discovered that adding potassium to a molybdenum carbide catalyst supported on a surface of gamma alumina could serve as a low-cost, stable, and highly selective catalyst for converting carbon dioxide into carbon monoxide during RWGS.

The potassium lowers the energy barrier associated with the RWGS reaction, while the gamma alumina—marked with grooves and pores, much like a sponge—helps ensure that the molybdenum carbide catalyst particles remain dispersed, maximizing the surface area available for reaction, Porosoff says.

To determine whether potassium-promoted molybdenum carbide might also be useful for capturing and converting carbon dioxide from power plants, the research group will conduct further experiments to test the catalyst’s stability when exposed to common contaminants found in flue gas such as mercury, sulfur, cadmium, and chlorine.

An Office of Naval Research award supported this project.