Engineering students give special needs children the gift of play

The Toys for All Tots student organization hosts workshops to teach other students and community members how to adapt battery-powered toys so that children with limited mobility can activate them on their own. 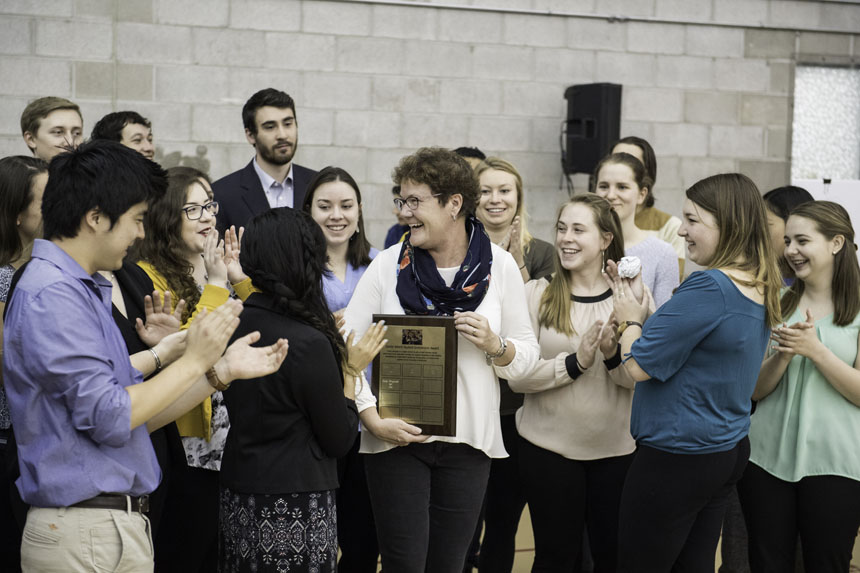 Ching Tang, professor of chemical engineering, has been awarded IEEE’s Jun-ichi Nishizawa Medal in recognition of his “groundbreaking discoveries” in OLED technology. The medal, named in honor of the “Father of Japanese Microelectronics” is given for outstanding contributions to material and device science and technology, including practical application.

OLED technology, which has spawned a multi-billion industry for advanced lighting and displays, features a series of thin light-emitting fields to provide brighter light but with less energy compared to traditional LED bulbs and liquid-crystal displays (LCDs).

“It was the groundbreaking discoveries of Tang during the late 1970s — that thin-film devices could emit light when a forward voltage was applied — that demonstrated the potential of OLED technology and spurred a new field focused on developing organic optoelectronic devices,” IEEE states. “He created the organic heterojunction, implemented the double-layer structure for enhancing the efficiency of electron hole recombination, developed new approaches for efficient electrodes, and discovered important emitter materials. Based on Tang’s accomplishments, the first full-color active matrix OLED displays were commercialized.”

Tang joined the Department of Chemical Engineering in 2006, after serving as a research scientist at the Eastman Kodak Co. for 31 years. Widely recognized as a leader in organic electronic technology and photovoltaics, Tang was elected to the National Academy of Engineering in 2006. He was also awarded the Wolf Prize in Chemistry in 2011 and honored by the Eduard Rhein Foundation of Germany and the Consumer Electronics Association in 2013.

The co-recipients of this year’s Jun-ichi Nishizawa medal are Stephen Forrest of the University of Michigan and Mark Thompson of the University of Southern California-Los Angeles. They are credited with taking OLED technology “to the next level by recognizing that OLED efficiency was being limited by the spin of excited states," IEEE states. "They introduced iridium-based phosphorescent dyes that increased internal OLED efficiency from 25% to near 100% and enabled OLEDs to compete with LCDs.” Read more here

While at Rochester he was recipient of a National Science Foundation CAREER award for his research on a realistic computer simulator to study how certain kinds of cells adhere to surfaces.

He advised Phd students in both biomedical and chemical engineering, including Nida Mody, who described King as “nothing short of brilliant” and “a superb role model.“

His appointment at Vanderbilt was effective Jan. 1, pending approval of the Board of Trustees.

King is an expert on the receptor-mediated adhesion of circulating cells, and has developed new computational and in vitro models to study the function of leukocytes, platelets, stem, and circulating tumor cells under flow. He has written textbooks on the subjects of statistical methods and microchannel flows, and he is currently the editor-in-chief of Cellular and Molecular Bioengineering.

Applications due March 15 for PhD fellowship

PhD students in chemical engineering are encouraged to apply for the Earl W. Costich Graduate Fellowship, which carries a one-year stipend of about $1,800. The award, named after a 1942 alumnus of the department, can supplement a student’s existing stipend.