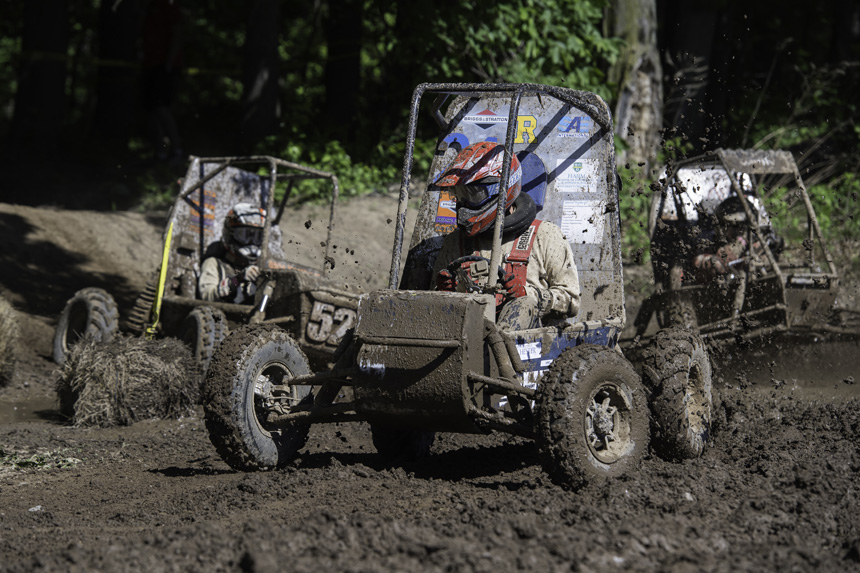 “With an impressive ‘war cry,’ Nick Van Swol started his team’s all-terrain vehicle down an obstacle-strewn course in Auburn, Ala. – and almost immediately ran out of bounds. Undeterred, Nick returned later that afternoon, and with an even more impressive war cry not only finished the course but placed 26th among 100 teams competing in the event.”

University of Rochester Baja SAE team members have traveled to Auburn; Pittsburg, Kansas – even as far as Portland, Ore., last spring – to race the all-terrain vehicles they design and build against student teams from other universities.

On June 9-12, however, they’ll compete in their own back yard, when neighboring Rochester Institute of Technology hosts a Baja SAE competition that will attract 100 teams, including 28 from other countries.

The competitions are the culmination of months of effort that engage students not only in designing and building a vehicle, but also generating financial and in kind support from outside sponsors and managing their educational priorities.

University of Rochester team members will also serve as student ambassadors for a team from India, which will assemble its vehicle in the Fabrication Studio at Rettner Hall during the week of the competition.

“We’re very excited to host Team Helios,” said Alycia Abbott ’16, who was the Rochester team president the last two years. For example, the students will provide space, tools, and camaraderie during the vehicle assembly, and will help transport the India team's truck to the competition venues.

The first two days of the competition will feature “static” events, including engine check, technical inspection, brake inspection, sales presentations and a design competition at RIT’s Gleason Auditorium, as teams compete against one another to have their design accepted for manufacture by a fictitious firm.

The final two days of “dynamic” events at the Hogback Hill Motocross in Palmyra will include grueling hill climb, acceleration, suspension and maneuverability competitions on June 11 that test specific aspects of a vehicle’s engineering, followed by a four-hour endurance race on the 12th.

Last-minute glitches, unexpected delays and equipment failures are the norm at these competitions, which puts a premium on organization and teamwork. The Rochester team is led by an executive board, consisting of the team president, business manager, chief engineer and chief mechanic. They are also part of the team’s design board, which includes six project team leaders who each manage a specific aspect of the car, such as drivetrain, suspension, electronics, frame, usability and exterior design.
The challenge each year is to come up with engineering refinements that strike a balance between speed, maneuverability, strength – and safety. (Click here  to read about this year’s changes.)

"The goal is to get the car built well before competition so they can do a lot of testing, tuning and redesigning," adds Sheryl Gracewski, professor of mechanical engineering, who is faculty advisor for the team.

Thanks to recruiting efforts and increased engineering enrollments, team membership has surpassed 30 in recent years, including sufficient numbers of freshmen to ensure that a strong core of experienced team members returns the following school year.

The team typically includes students from each of the engineering departments and computer science, but has also included students from majors as varied as finance (in line with the team’s goal of developing a successful business model) and music.

For example, one month after performing a recital on the Italian Baroque Organ at the Memorial Art Gallery, Eastman School of Music student Autumn Coe wielded a Dremel tool to finish a spill guard as the team readied its vehicle for a competition at Tennessee Tech in spring 2013.

William Green ’16 described serving as the Usability Team Leader during his sophomore year, when he was responsible for cockpit ergonomics and for “every system the driver touches” -- for example, the pedal, steering system, and brakes. He also worked with private sector sponsors for the team.

“I don’t think you can get that opportunity -- even in industry – to be involved in the design, manufacturing and business aspect altogether. Baja really does give students an opportunity to explore all of those different aspects of engineering at the same time.”