Brendan Coli studies abroad in Cape Town: "It was too good an opportunity to pass up" 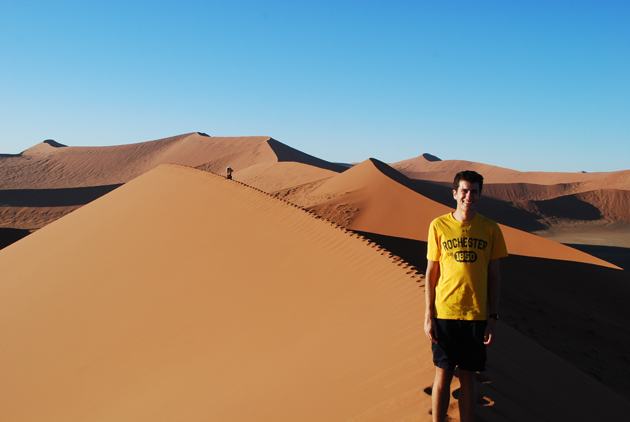 Brendan Coli, a junior in Chemical Engineering, spent last semester studying abroad at the University of Cape Town in South Africa. Here’s a Q&A with Brendan, who is shown above standing at Dune 45 during an excursion to Namibia. Also, be sure to check out the day-by-day video he compiled of his experiences.

Question: Why did you decide to study abroad?

At the time of making my decision, I had no experience traveling outside of the United States or Canada. I go to school a mere 90-minute drive along I-90 from where I had grown up all my life. I knew that an extended period of time living independently in a totally unfamiliar environment would help foster my personal growth and agency. I had heard such positive reviews from students who had studied abroad that I felt that taking a semester abroad could only help me and make me happier.

My interest in studying in Cape Town specifically was sparked by an interest meeting held for a ChemE summer program in Cape Town studying alternative energy. The program was later moved to York in the UK, but my initial research indicated Cape Town had a world-renowned status as a diverse, metropolitan, and beautiful city. The program there offered courses in English and corresponded to my major. It was too good an opportunity to pass up.

Was it easier/harder than you expected to arrange this?

Arranging my placement into IES Cape Town was not as difficult as I expected. The most difficult part was checking with the Study Abroad Office and IES in order to ensure that the two ChemE courses I needed to take abroad would be offered in the Fall 2014 semester and that the credit would transfer. Once this was sorted, I had only to submit a short application including my transcript, a few essays, and a of couple references.

I was accepted into the program the next day (they are eager to accept engineers; most IES students are humanities or social science majors), and the next major hurdle was collecting the materials necessary to apply for a study permit.

Were you able to take courses that satisfied requirements here?

I was able to take two courses abroad - CHE2040S and CHE2035S - that corresponded to CHE 244 (Heat and Mass Transfer) and CHE 225 (Thermodynamics I). I got credit for both courses, and after talking to my peers in ChemE, it seems as if my University of Cape Town courses covered most of the information that the U of R equivalents covered.

There is one notable difference, however, relating to CHE2040S. It covers fluid dynamics (which is covered in CHE 243 in the U of R curriculum), heat transfer, and heat exchanger and fluid circuit design. The design aspect of the course was fun and very interesting, but as a result mass transfer was not covered at all (it is a separated course in the UCT Chemical Engineering curriculum). Having familiarity with mass transfer for CHE 250 (Separation Processes) would be helpful, but we are currently reviewing some aspects of it, so not essential.

Was this a beneficial experience?

Studying in Cape Town was definitely a positive experience for me. Living in an off-campus apartment, exploring the city and its museums, markets, mountains, and beaches, and traveling within South Africa gave me a previously unfounded sense of independence and empowerment. I grew intellectually through ways I expected in my classes and ways I didn’t expect in taking note of different accents, culture, and ways of living. I have some incredible memories and defining experiences forged with friends I made through the University of Cape Town, IES, and my girlfriend (whom I met while abroad).

Any favorite memories or special experiences?

My favorite memory has to be paragliding in Cape Town. I spent about 30 minutes flying over Lion’s Head (a mountain in the middle of the city), the ocean, and the city itself whilst strapped to a pilot controlling the paraglider. It was the best way to experience the city I’d lived in for 2 months from a totally different perspective, and it is one of the most exhilarating experiences I’ve had in my life.

Would you encourage other Hajim School students to study abroad?

Studying abroad is definitely something I would encourage other students, Hajim students included, to do. It offers engineering students the chance to take on a less rigorous yet comparable course schedule, allowing for more time for travel and experiential learning. This is not something that I’ve been able to do in my engineering coursework at the U of R.

Studying abroad as an engineer and being able to talk about your experience in a constructive way is extremely helpful in job interviews, especially if you can find a relevant internship during your period of study.

Finally, depending on where you decide to go, you may see how what you study can actually help people in real life. I experienced this in Cape Town after learning about pollution and alternative energy issues in South Africa through my classes and my time working on a bio-filtration project in a community in Cape Town called Oude Molen.

Brendan paraglided over Lion's Head, seen at left, and enjoyed a great view of Cape Town from Devil's Peak, at right.